Today is the 95th birthday of retired Supreme Court Justice John Paul Stevens, and I am writing in honor and appreciation of his long, fruitful life.
Stevens, who was born in Chicago in 1920, was nominated for the U.S. Supreme Court by President Ford in 1975. He served in that position for 35 years, retiring in 2010.
(It is interesting to note that when he was appointed to the Supreme Court, he was one of eight Protestants among the nine Justices. When he retired and was replaced by Elena Kagan, a Jew, there were no longer any Protestants on the Court.) 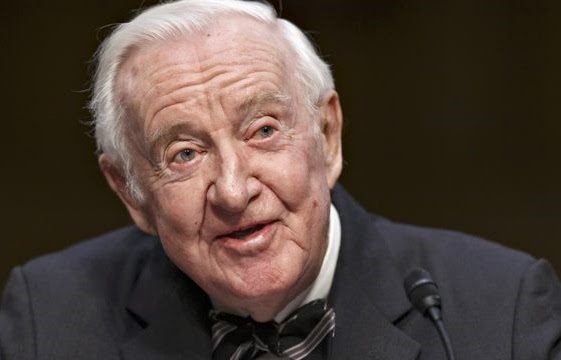 In spite of retiring at the age of 90, Justice Stevens has continued to be active. The picture on the left was taken last April 30 as he was testifying before the Senate Rules Committee on Capitol Hill.
It was also just last year that his new book, “Six Amendments: How and Why We Should Change the Constitution,” was published. While all six of Justice Stevens’s proposed amendments are significant, I am most interested in four of them.
Those four would do away with political gerrymandering, would make it possible for the U.S. Congress or states to limit the amount of money that could be spent in election campaigns, would do away with the death penalty, and would change the Second Amendment to read, “the right of the people to keep and bear Arms when serving in the Militia shall not be infringed.
Since I wrote about the latter issue previously (here), I will not say more about that at this time.
With regard to the first issue mentioned above, gerrymandering, as you know, means manipulating boundaries of electoral districts so as to favor one party or group. Justice Stevens’s proposed amendment would address the seriously flawed boundary lines for U.S. representatives which have been drawn in many states across the nation.
The highly controversial 5-4 “Citizens United” decision of the Supreme Court in January 2010 was strongly criticized by Justice Stevens. He wrote a 90-page dissenting opinion, setting forth his unhappiness with the majority position.
It is not surprising, therefore, that one of the six amendments to the Constitution that he proposed in his 2014 book is about that decision.
In his talk to the Senate Committee last year Justice Stevens said, “While money is used to finance speech, money is not speech.” So Stevens’s proposed campaign finance amendment would essentially overturn Citizens United, allowing Congress to set “reasonable limits on the amount of money that candidates for public office, or their supporters, may spend in elections.”
In 1976, the year following his appointment to the Supreme Court, Justice Stevens voted to uphold the death penalty. When he retired 34 years later, he said that decision was the main one he regretted.
In his 2014 book, he says that retribution is the only legitimate justification for preserving capital punishment—and he doesn’t think that is a good or sufficient reason.
So Justice Stevens now advocates amending the Eighth Amendment to include the words “such as the death penalty” as an example of “cruel and unusual punishment,” which is currently prohibited.
At the time of his retirement in 2010, J. Brent Walker, executive director of the Baptist Joint Committee for Religious Liberty and a member of the Supreme Court Bar, wrote, “Justice Stevens has been a thoughtful, diligent jurist who has served the Court and this country admirably.”
The retired Justice has continued his meritorious public service by his book advocating significant Constitutional amendments.
Happy birthday, Justice Stevens—and thanks for all you have done!
Posted by LKSeat at 5:29 AM