What Would King say about Ferguson?

Fifty years ago today, on Dec. 10, 1964, Martin Luther King, Jr., was awarded the Nobel Peace Prize. He was 35 years old, and at the time was the youngest person ever to be given the Peace Prize, which was first awarded in 1901.
King gave an acceptance speech upon receiving the prodigious prize on that December day, and on the 11th he delivered the Nobel Lecture. 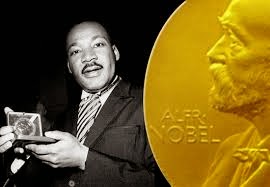 From 1960 until his death in 1968, King and his father were co-pastors of Ebenezer Baptist Church in Atlanta. (That is also where one of King’s funerals was held on 4/9/68.) Last Monday (Dec. 1) Attorney-General Holder met with community leaders of Atlanta in Ebenezer BC.
That gathering was publicized under the name “The Community Speaks: A Service. A Forum. A Place to be Heard.” Prior to that meeting Ebenezer Church’s Facebook page explained,

This service is designed to provide a sacred space for interfaith prayer, solidarity, communal lament, and constructive outlets for community involvement that furthers the work of social justice locally, nationally and globally.

What would King have said last week if he had been there at Ebenezer? (If he had not been assassinated, at age 85 he might have been.)
King would, no doubt, have expressed great sadness at the shooting death of an unarmed black teen-ager. And it is most likely that he would have also expressed grave reservations about the grand jury’s refusal to indict Darren Wilson.
Doubtlessly, King would also have decried the violence that has marred the protest in Ferguson and elsewhere. As he did in the 1950s and ’60s, he would have appealed for nonviolent demonstrations.
In his acceptance speech for the Nobel Peace Prize, King declared that “nonviolence is the answer to the crucial political and moral questions of our time,” and that it is necessary for humans “to overcome oppression and violence without resorting to violence and oppression.”
King also declared in his Nobel lecture, “Violence as a way of achieving racial justice is both impractical and immoral.”
Further, “Violence is immoral because it thrives on hatred rather than love. It destroys community and makes brotherhood impossible.” And then, “Violence ends up defeating itself. It creates bitterness in the survivors and brutality in the destroyers.”
If King were to have come back, Rip van Winkle style, to Ebenezer last week, he would quite likely have expressed great disappointment that the racial situation has not improved more than it has since 1964.
In his Nobel lecture, King talked about racial injustice, poverty, and war. Sadly, not very much has changed in 50 years.
In that lecture, King spoke about how we humans suffer from

a poverty of the spirit which stands in glaring contrast to our scientific and technological abundance. The richer we have become materially, the poorer we have become morally and spiritually. We have learned to fly the air like birds and swim the sea like fish, but we have not learned the simple art of living together as brothers [and sisters].

King’s acceptance speech was full of hope, though. To some that may have sounded then, and maybe especially now, as “liberal” or humanistic optimism. But there is a distinct difference between hope and optimism.
King was not, and most likely would not today be, optimistic about race relations in the country. But he was hopeful then, and as a man of deep Christian faith, he would be hopeful now.


That hope rests partly in people of good will truly seeking freedom and justice for all.
Posted by LKSeat at 5:28 AM