Should missionaries ever seek to change social practices and work to make laws that would change what is thought unacceptable in the countries to which they go? Most Christians now would probably say No, although perhaps they would allow for some exceptions, such as in cases such as sati (suttee) in India and foot binding in China.
Sati, the practice or burning widows on the pyres of their dead husbands, was strongly opposed by English Baptist missionary William Carey for 25 years, and in 1829 it was finally banned in India.
Partly as the result of considerable opposition by Christian missionaries in China, the cruel practice of mutilating the feet of young girls, usually called “foot binding,” was outlawed there in 1912.
In both of these cases, missionaries were opposed to customs that were unlike Western practices because of the perceived harm done to people they wanted to liberate from inhumane practices.
But in very recent years there is the odd phenomenon of some missionaries promoting legislation that most Western countries now reject. The main case in point is the anti-homosexuality legislation in Uganda. It was exactly a year ago, on Dec. 20, 2013, that the Ugandan legislature passed a harsh law authorizing severe punishment for homosexual activity in that African country.
As has been widely publicized, and severely criticized, by many Westerners, some of the impetus behind that Ugandan anti-gay legislation was the outspoken support of some Christian missionaries and U.S. pastors.
Earlier this year I watched “God Loves Uganda,” the 2013 documentary about those working for and against anti-homosexuality legislation in that country.
The movie starts with scenes from Kansas City and clips of Lou Engle, one of the co-founders of IHOP in 1999. Throughout the film there are many references to IHOP missionaries working for the anti-gay legislation in Uganda.
IHOP (the International House of Prayer) is considered by many to be a Christian cult. But one of the best students I had one semester three or four years ago was a member of IHOP, and she had nothing but praise for her “church.”
And in stark contrast to what is depicted in the documentary, IHOP has disavowed any connection with the anti-homosexuality legislation in Uganda. (Here is the link to an interview with Mike Bickle, the main leader of IHOP from its beginning, about that matter.)
In spite of IHOP’s disclaimer, however, it is hard to think that the makers of “God Loves Uganda” fabricated the footage of IHOP-linked missionaries being strong advocates of the anti-gay legislation.
On the other hand, the documentary also shows some Ugandan Christian leaders (especially Christopher Senyonjo, a retired bishop in the Church of Uganda and Kapya Kaoma, an Anglican priest) staunchly opposing the anti-homosexuality bill. 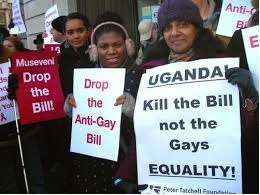 At the end of the film it was noted that the “Anti-Homosexuality Act” was signed by the Ugandan president on Feb. 25, 2014. In August, however, that law was declared unconstitutional on a technicality. But an equally harsh, or even harsher, law is still very much in the works, it seems.
There are some efforts for cultural change and legislation that are legitimate for missionaries to be engaged in. That includes, for example, anti-FGM (female genital mutilation) activities at the present.
People who are mistreated, demeaned, or treated unjustly need to be liberated from customs and practices that seem clearly to be in opposition to the teaching and example of Jesus. Thus, those born with homosexual orientation are appropriately included with people needing liberation and they should never be made the target of unjust laws.
Posted by LKSeat at 5:13 AM