Saturday afternoon the Missouri University basketball team won their second close game in three days. June and I are Mizzou basketball fans, so we really enjoyed watching those two games as well as most of their other 16 wins this season. Watching their 7 losses is another story.
Although we did not see the halftime activities, the MU football team was honored for their stellar season, culminating with their winning the Cotton Bowl last month. (I am a big Mizzou football fan also, but, unfortunately, June won’t watch football with me.)
MU football team’s “most valuable player” this past season was their 255-pound defensive end, Michael Sam. As most of you know, Sam has been much in the news this month, for he openly announced that he is gay.
(Sam’s teammates had known that, and accepted him without a problem, already.)
Also, as many us of might have guessed, the Westboro Baptist Church (WBC) was not happy with Sam’s announcement—or with the University of Missouri. Thus, last Saturday WBC called for a demonstration against “fag football player shameless Michael Sam” and his supporters.
On the church’s website (GodHatesFags.com), the 2/11 announcement of the picketing plans at Columbia on 2/15 ends with the words, “God hates fag football players and their enablers.”
Admirably, some 2,000 students and townspeople rallied to form a peaceful “human wall” to separate the basketball arena (and the football team) from the hateful protest of WBC.
Westboro Baptist Church members, however, were not the only ones practicing what can be called “faith-based discrimination.”
While most members of the Kansas House of Representatives probably do not approve of the extreme measures of the Topeka church, on February 12 they passed a bill which would allow discrimination based on religious beliefs.
Though the short title of Kansas House Bill 2453 is “Protecting religious freedom regarding marriage,” the language of the bill would broadly give commercial establishments the right to discriminate against gay couples on the basis of the religious beliefs of those who own and/or operate those establishments.
(This issue is closely related to opposition to the health insurance mandate on the basis of religious beliefs, a matter about which I recently wrote.)
Even though HB 2453 was passed by a 72-49 (60%) vote, it seems to have little chance of being approved by the Kansas Senate. Still, it is troublesome when a legislative body will “use religion as a vehicle for bigotry.”
The above quote is from a Feb. 14 editorial in The Kansas City Star, which says that HB 2453 “would make it possible for Kansans to cite religious belief as an excuse to deny services to gay and lesbian persons.”
The Star followed up their editorial by printing Lee Judge’s cartoon in the Sunday paper: 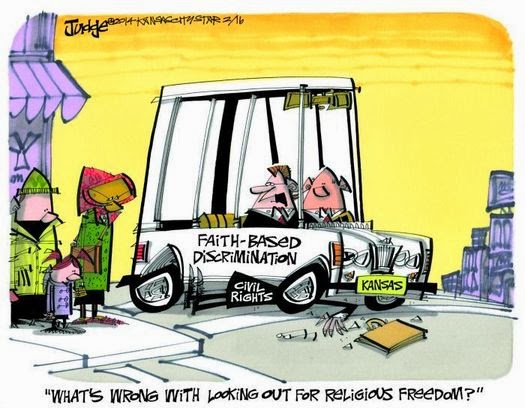 Whether it is the misguided actions of a church or of a state House of Representatives, faith-based discrimination is not only wrong, it also tends to blight the reputation of Christianity as a whole and of church groups and individual Christians who seek to accept, and to treat, all persons as equals, regardless of racial, ethnic, gender, or sexual orientation differences.
Posted by LKSeat at 5:30 AM