Infringement on Religious Freedom: Then and Now

A year ago, my blog posting was about Roger Williams, who arrived in Boston Harbor on Feb. 5, 1631. As you know, Williams became the great champion of religious liberty in the Colonies and influential in freedom of religion eventually being included in the U.S. Constitution.
But 113 years after Williams’s arrival in the “new world,” there still wasn’t religious freedom in the Colonies, at least not in Virginia. On Feb. 4, 1774, 240 years ago today, David Tinsley was arrested and charged with “having assembled and preached to the people at sundry times and places” as a Baptist preacher.
Tinsley ended up serving four and a half months in the Chesterfield County jail. During that time, though, he “preached to the assembled crowds through the grates of the prison” (This Day in Baptist History).
Just last year I learned the particulars about the preachers jailed in the 1770s because they were publicly preaching as Baptists. And I was especially interested in Tinsley, who was one of several so jailed.
My wife, June, was a Tinsley. So we began to do some research and found that David’s grandfather was Thomas S. Tinsley, the first Tinsley to be born in the U.S. (He was born in 1640, two years after his parents had come to Virginia from England.)
And Thomas S. Tinsley is June’s 7th great grandfather, so David was her first cousin, seven times removed.
Not being able to assemble a crowd and preach to them seems, certainly, to be an infringement on religious liberty. Accordingly, some of the most outspoken advocates of guaranteeing religious liberty were Baptists in Virginia, such as John Leland, a Baptist preacher who worked with (or worked on) James Madison in getting the Bill of Rights added to the U.S. Constitution.
But now, in 2013-14, there are Baptists claiming that they, and other Christians, are suffering from an infringement of their “freedom of religion.”
Just last week the Southern Baptist Ethics & Religious Liberty Commission (ERLC) told the U.S. Supreme Court, as part of a friend-of-the-court brief, that the Obama administration’s abortion/contraception mandate (their words) violates a federal law protecting the religious freedom of for-profit corporations and their owners.
Russell Moore, president of the ERLC, in a Jan. 28 podcast said, “Our Baptist forefather John Leland wasn’t content to trust politicians with tyranny over the conscience. We are his sons and daughters, and we will carry the banner of soul freedom to the Supreme Court and beyond.”
What a difference! Leland was struggling for the freedom of Baptists in Virginia to preach without being arrested and jailed. But now Baptists like Moore are struggling for the right of employers not to provide insurance to their employees who might use that insurance in ways that they (the employers) do not approve for religious reasons. 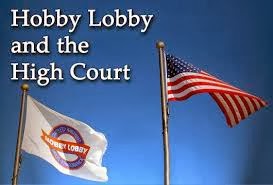 Rather than religious freedom for all, it sounds as if these employers (such as Hobby Lobby’s CEO, who is an evangelical Christian but seems not to be a Baptist) are seeking to have tyranny over the conscience of other people. Since they do not believe in the morning after pill, they do not want to provide insurance that will allow their employees to use such measures, even if they can do so in good conscience.
David Tinsley suffered in jail because of preaching the Gospel openly. Hobby Lobby’s CEO and other conservative Christians are now “suffering” because of being required to provide insurance for their employees.
Somehow the “infringement” of the latter’s religious freedom just doesn’t seem quite as great a problem to me.
Posted by LKSeat at 5:35 AM