Boxing is not my favorite sport, to say the least. But in the early 1960s June and I followed with considerable interest the up-and-coming career of a flashy Louisville boxer.
That boxer was Cassius Clay, who won the heavyweight championship of the world 50 years ago, in February 1964. Partly in recognition of Black History Month, this column is about Clay, who later became known around the world as Muhammad Ali.
Cassius Marcellus Clay, Jr., was born on January 17, 1942, in Louisville, Kentucky. His parents were members of the Southern black middle class, certainly not wealthy but better off than most African-Americans of that time.
Still, young Cassius grew up feeling the discomforts of racism and prejudice. According to Anthony O. Edmonds’s biography Muhammad Ali (2006), “the defining moment in his racial education” came when his father told him about the murder of Emmett Till in August 1954.
Even though I am 3½ years older than Ali, I don’t even remember hearing about that tragic event at the time. But, of course, I was not a black boy in the South.
It was that same year, when Cassius was 12, that he first began training to be a boxer. His amateur career, especially at the beginning, was not an overwhelming success. Still, he won the national Golden Gloves titles in both1959 and 1960.
Then in September 1960, while still only 18, Clay won the light-heavyweight gold medal at the Summer Olympics in Rome. That was, no doubt, when June and I began to hear about him, for we had moved to Kentucky the year before and were regular readers of his hometown newspaper, The Courier-Journal. 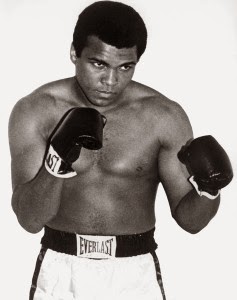 In spite of the latent racism in and around Louisville, Clay enjoyed considerable acclaim when he came back from Rome with a gold medal. Later that year he turned pro and began a stellar career as a professional boxer.
He later claimed that he started boxing because “it was the fastest way for a young black man to achieve social and economic mobility” (Edmonds, p. 17). Especially up to and including the time of his stunning defeat of world heavyweight champion Sonny Liston on February 25, 1964, more and more accolades were heaped upon him.
By then he had, indeed, achieved celebrity status and considerable wealth. But public opinion quickly began to change when Clay changed his religion. Just the day after the Liston fight, Clay announced that he had given up Christianity and had become a member of the Nation of Islam.
Then on March 6, 1964, he announced that he had given up his “slave name” and that his new name was Muhammad Ali. His name change is a bit ironic in light of the fact that Cassius Marcellus Clay (1810-1903), the noted Kentucky planter and politician for whom he was named, was an ardent abolitionist.
There is much more to Ali’s story: his conviction in 1968 for refusing induction into the Army, his contracting Parkinson’s disease in 1984, his lighting the torch for the Atlanta Olympics in 1996, his being awarded the Presidential Medal of Freedom in 2005 and the $80 million Muhammad Ali Center opening in Louisville that same year.
Sadly, Ali, who now lives in Arizona, is said to be in “terminal decline” from his Parkinson’s. But the “Louisville Lip” was a colorful man I remember well from more than fifty years ago. Some of what he said is worth remembering, too.
Here is one of his notable quotes: “Service to others is the rent you pay for your room here on earth.” Good words, indeed.
Posted by LKSeat at 5:27 AM