Fritz Eichenberg is a man worth knowing about, so let me tell you a bit about him in case you are not familiar with him. Born in Cologne, Germany, in 1901, Eichenberg became an outstanding illustrator who worked mostly in wood engraving. He died 13 years ago today, on Nov. 30, 1990, in Rhode Island.
Eichenberg’s best-known works are concerned with religion, social justice and nonviolence. Some of those are collected in a nicely-done volume published by Orbis Books in 1992 under the title “Works of Mercy” (WM).
That impressive book includes meditations by Gandhi, Dorothy Day, Thomas Merton and others. Eichenberg’s comments focus on the meaning of Christ’s life—especially his message of peace and his compassion for the poor and downtrodden.
Many of the inspiring wood engravings reproduced in the book appeared at one time in “The Catholic Worker” (about which I wrote here back in May). Eichenberg met Dorothy Day at a Quaker conference in 1949 and was her friend and supporter from that time until her death in 1980.
A public critic of the Nazis after the rise of Adolf Hitler, Eichenberg emigrated to the U.S. in 1933. Following the unexpected death of his wife in 1937, he turned briefly to the practice of Zen Buddhism and then became a Quaker in 1940—and he remained a Quaker until his death 50 years later.
During his long and prolific career as a book illustrator, he especially drew for books with elements of great spiritual and emotional conflict or social satire. He is known especially for his illustrations of works by Dostoyevsky, Tolstoy, and the Brontë sisters.
I recently purchased a used copy of the 1943 edition of “Jane Eyre” by Charlotte Brontë. There are numerous, and compelling, wood cut illustrations by Eichenberg in it, and I am looking forward to reading it before long, partly to enjoy Eichenberg’s pictures along the way.
But it is his religious illustrations that I appreciate most. His “Lord’s Supper” (1953; p. 85 in WM) is one of my favorites. I have seen it on the wall at the Catholic Worker house in Kansas City, and I have read that it hangs on the wall of almost every Catholic Worker house. 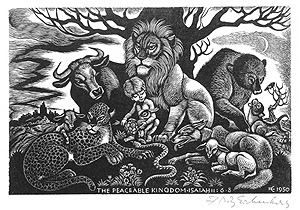 With the beginning of Advent begins tomorrow, let us join in praying that the vision of the prophet, captured so appealingly by Eichenberg, might become more and more a reality through the Prince of Peace, whose birth we celebrate in less than a month from now.
If, as is often said, a picture is worth a thousand words, Fritz Eichenberg spoke much, and elegantly, through his lifetime of outstanding works of art. I highly recommend “Works of Mercy” for your consideration.
(Eichenberg’s book, available at Amazon.com, might make a good Christmas present for someone you know. If you have a large budget, you can purchase original signed Fritz Eichenberg wood engravings at this site.)
Posted by LKSeat at 5:30 AM