What Ever Happened to Southern Baptists?

"What Ever Happened to Baby Jane?” is a highly acclaimed 1962 black-and-white movie. June and I enjoyed watching that psychological thriller for the first time last Friday evening.
Baby Jane was an adorable vaudeville performer in 1917 as the movie begins, and after a few scenes in 1935 most of the movie takes place in the present (1961) when the former Baby Jane Hudson has become an ugly villain, impressively portrayed by Bette Davis.
Please don’t misunderstand: I am not comparing the evil Jane Hudson, or the movie, to Southern Baptists in most ways. But there are, unfortunately, some similarities.
During much of my lifetime, the Southern Baptist Convention (SBC) was a vibrant, generally attractive, growing denomination. Figured as the percentage of the total U.S. population, SBC membership grew by more than 30% from 1950 to 1980.
But things began to change, and the percentage of SBs decreased by nearly 15% from 1990 to 2010. There were multiple reasons, but during that time the SBC, like Baby Jane, had turned rather ugly under the leadership of fundamentalist-leaning leaders. 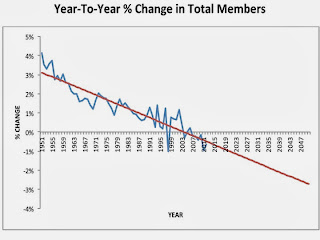 Consequently, from 1950 to 2010 I personally changed from being a proud (in the good sense of that word) Southern Baptist, to a wary SB, then to an embarrassed SB (as I wrote about in my book “Fed Up with Fundamentalism”), and finally to being a former SB.
The Southern Baptist Convention has long been the largest Protestant denomination in the United States. According to the 2012 "Yearbook of American & Canadian Churches," the SBC has 16.2 million members, more than twice the number of the second place United Methodist Church with 7.8 million.
And yet a recent article in the Wall Street Journal points out that Baptists are departing from the religious traditions of their childhood faster than any other Protestant group.”
LifeWay Research, a polling firm tied to the SBC, even projects that the church’s membership will fall by half, to 8.5 million by 2050, returning to the level of the mid-1950s.
Decline in membership, of course, is not only a Southern Baptist phenomenon. Diana Butler Bass’s book Christianity after Religion (2012) documents the notable decline of membership in most U.S. Protestant denominations. But the decline in the SBC is among the most pronounced.
There are several possible reasons for the downward trend. Let me suggest just a few:
·   An inability, or lack of desire, to keep up with the changing mindset of the times. Like the aging Jane Hudson, many SBC churches and institutions seem to want to live in the heyday of the past (the 1950s) rather than seeking to cope with the new realities of a new generation.
·   A retroactive stance toward women. Recently Susan Brooks Thistlethwaite posted a provocative article, “Five Christian theologies scarier than Halloween.” One of the five: “women should 'submit’”—such as was called for in the Baptist Faith and Message as amended in 1998.
·   A marked alignment with conservative Republicans. In contrast to Jimmy Carter, the most famous SB politician of the 1970s, we now have Sen. Ted Cruz at the leading SB in Washington. In addition to Sen. Cruz, all five of the Southern Baptist U.S. Representatives who took office in January are conservative Republicans who last month voted against the bill to re-open the government and raise the debt ceiling. No wonder many people look askance at SBs!
Baby Jane couldn’t restore her previous attractiveness. But such would be possible for Southern Baptists, and I hope that it will happen—and pray it will happen long before the end of the projected 50-year decline.
Posted by LKSeat at 5:28 AM