He was an odd guy in many ways. He was out of step with, and way ahead of, the times in which he lived. And he was a constant irritation to the religious establishment of Denmark, the country in which he lived his entire life.
Søren Kierkegaard is the one of whom I am writing. He was born two hundred years ago, in February 1813, and died at the young age of 42, on November 11, 1855. (This is third month in a row to write about a significant Christian thinker/doer of the past; in September I wrote about Albert Schweitzer, and last month it was Jonathan Edwards.) 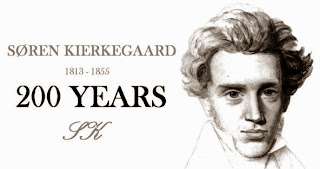 When I was a junior at William Jewell College I remember hearing about Kierkegaard for the first time. My interest in him grew over the next several years—so much so that my doctoral dissertation was titled “The Meaning of ‘Paradox’: A Study of the Use of the Word ‘Paradox’ in Contemporary Theological and Philosophical Writings with Special Reference to Søren Kierkegaard.”
When I was writing my dissertation, I was mainly interested in Kierkegaard’s brilliant thinking. But soon after beginning my teaching career in 1968 I read the (to me) captivating book “Kierkegaard and Radical Discipleship: A New Perspective” (1968) by Vernard Eller, the outstanding Church of the Brethren scholar. (That stimulating book can be found online here.)
Reading Eller’s book led me to read again Kierkegaard’s last writings, collected in a book entitled “Kierkegaard’s Attack Upon ‘Christendom' 1854-1855” (1944; new edition, 1968). That volume is a hard hitting collection of criticism not of Christianity but of Christendom, institutionalized Christianity as seen in the state church of Denmark (and, by implication, elsewhere).
In the year he died, Kierkegaard expressed his opposition to Christendom like this: “The religious situation in the land is:
“Christianity (that is, the Christianity of the New Testament—and everything else is indeed not Christianity, least of all by calling itself that), Christianity does not exist at all . . . .”
So in a sense Kierkegaard was a fundamentalist—but not in the sense of emphasizing the sine qua non doctrines of Christianity as did the fundamentalist movement in the first quarter of the twentieth century. Rather, he emphasized that real Christianity must include “radical discipleship,” to use Eller’s words.
Kierkegaard’s writings included philosophical/theological works such as “Philosophical Fragments” (1844) and “Concluding Unscientific Postscript to Philosophical Fragments” (1846), psychological/theological books such as “Fear and Trembling” (1843) and “The Sickness unto Death” (1847), and devotional/theological writings such as “Works of Love” (1847) and “Practice in Christianity” (1850).
For you who would like to read more of Kierkegaard’s challenging thinking, I highly recommend the excellent book “Provocations: Spiritual Writings of Søren Kierkegaard,” which is available as a free ebook at this link.
The first half of that book, selected and edited by Charles E. Moore, is a summary of SK’s key ideas, and then roughly the last half is a collection of excerpts and aphorisms arranged topically. Reading “Provocations” greatly helps us to understand Kierkegaard better. But more importantly, it helps us to grasp more fully what it means to be a true Christian.
Long before Bonhoeffer wrote his noted book about Christian discipleship, Kierkegaard stressed the necessity for Christians to follow Jesus faithfully. In his words, “Christ comes to the world as the example, constantly enjoining: Imitate me. We humans prefer to adore him instead” (Kindle, loc. 3426).
Even though he died 158 years ago, not only is Søren Kierkegaard still well worth remembering, his thought-provoking writings are worth reading, pondering, and embracing.
Posted by LKSeat at 5:59 AM