What are Republicans Thinking?

This article is not about Republicans in general. Rather it is particularly about the Republicans in the U.S. Congress.
The record of these Republican Congresspersons over the last three years has been quite consistent: they have almost unanimously opposed nearly everything the President has proposed.
There has always been political division in the country, but perhaps there has never been as much polarity as there is now.
In the Senate, the Democrats became so frustrated last week that they even used the “nuclear option” and changed the rules for approving nominations for executive and judicial positions.
That was not necessarily a good thing. But neither is the ceaseless obstructionism that led to that extreme, and possibly unwise, decision.
In particular, I am raising the question about what are Republican lawmakers thinking in their ongoing, obdurate opposition to positions that the large majority of U.S. citizens, including Republicans, are for.
Consider four such issues: (1) legislation to outlaw hiring/firing discrimination against gays/lesbians, (2) immigration reform, (3) background checks for those who want to purchase guns, and (4) raising the minimum wage.
(1) On Nov. 7, the Senate passed the Employment Non-Discrimination Act (ENDA) by a vote of 64-32. (One of the negative votes was by Republican Senator Blunt of Mo.) But at this point, Rep. Boehner has refused to bring the bill up for a vote in the Republican dominated House.
A recent Gallup poll found that nationwide ENDA is supported by 63% of the citizens nationwide, with only 31% opposing it. Even among Republicans, there were 58% in favor and only 36% in opposition. 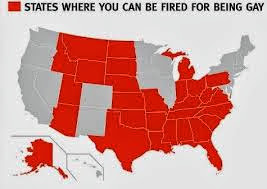 (2) Back in June, the Senate passed an immigration bill by a 68-32. (The negative votes were all by Republicans, including Senator Blunt.)
But it has yet to be approved by the House, even though earlier this year a CNN poll showed that 84% of the public (78% of the Republicans) backs a program that would allow undocumented workers to stay in the United States and apply for citizenship if they have been in the country for several years, have a job, and pay back taxes.
(3) The tragic school shootings at Sandy Hook were nearly a year ago. There were outcries across the nation for more stringent gun control. In April the Senate bill to extend background checks received 54 votes—but was killed by a Republican filibuster.
A subsequent Gallup poll then indicated that 65% of Americans thought that Senate bill should have passed; only 29% thought it shouldn’t have.
(4) Back in March, Senator Harkin (D-IA) proposed the Fair Minimum Wage Act of 2013, calling for an increase from the current $7.25 to $10.10. This month after passing ENDA, the Senate began to consider Sen. Harkin’s bill along with other possibilities.
This month, a Gallup poll indicated that U.S. citizens favor raising the minimum wage to at least $9.00 by a margin of 76% to 22% (and 58% to 39% among Republicans). But the Senate has yet to come up with anything that they think will be able to clear an expected Republican filibuster.
So here are four hot issues with overwhelming public support for change but which are opposed by Republicans in Congress—which leads again to my question: What can they be thinking?
And how can they claim to be representing the citizens of the country when they keep opposing what a large majority of the citizens are for?
Of course another pertinent question is this: Why do people keep electing lawmakers who do not vote according to the desires of the majority of the American people?
Posted by LKSeat at 5:30 AM