Richard Rorty was an American philosopher who is not well known outside of academic circles. I certainly have not read him extensively and do not know a lot about him. But I have recently read, and have been impressed with, his 1998 essay titled “Failed Prophecies, Glorious Hopes.”
Rorty, who died six years ago this month (in 6/07) at the age of 75, was the grandson of the noted German-American theologian Walter Rauschenbusch, the son of the latter’s oldest child. But unlike his grandfather and mother, Rorty was a secular humanist rather than a Christian believer. 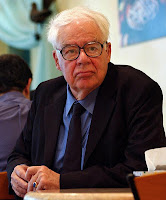 Still, Rorty had great appreciation for his grandfather. That is evident from the afterword he wrote for “Christianity and the Social Crisis in the 21st Century,” the centennial re-issue of Rauschenbusch’s classic work “Christianity and the Social Crisis” (1907).
From his secular humanist viewpoint, Rorty compares the New Testament and the Communist Manifesto in the 1998 essay. He avers that


both documents are expressions of the same hope: that some day we shall be willing and able to treat the needs of all human beings with the respect and consideration with which we treat the needs of those closest to us, those whom we love.

That glorious “hope for social justice,” says Rorty, is “the only basis for a worthwhile human life.” And, according to Rorty, the idea of social justice includes the hope that “the world might be changed so as to ensure that no one goes hungry while others have a surfeit.”
Rorty realized that if social justice is to be achieved there will have to be some redistribution of wealth. Echoing the emphasis of his grandfather on the “social gospel,” non-Christian Rorty declares, “There is no way to take the New Testament seriously as a moral imperative . . . without taking the need for such redistribution equally seriously.”
Then, alluding to the Communist Manifesto, Rorty writes,

To say that history is the history of class struggle is still true, if it is interpreted to mean that in every culture, under every form of government, and in every imaginable situation . . . the people who have already got their hands on money and power will lie, cheat and steal in order to make sure that they and their descendants monopolize both for ever.

But, alas, both the New Testament and the Manifesto of Marx and Engels have to this point been “failed prophecies.” We in the United States have no trouble seeing the miserable failure of Marxism in most of the countries where it became dominant.
Cambodia is a good example. The Khmer Rouge was the Communist Party of Cambodia under the despotic rule of Pol Pot. It may have embraced a glorious hope for social justice in the beginning, but it is hard to imagine a more dismal failure. More than 2,000,000 Cambodians were killed by the Khmer Rouge in the 1970s.
Certainly the New Testament has not failed so miserably, especially in recent decades. And yet, from the time of Charlemagne through the era of European colonialism to rather recently, political and military rulers who have claimed to be Christians have led to the slaughter, enslavement, and oppression of people around the world.
I am not as pessimistic as Rorty was. Many Christians are still seeking social justice based on the teachings of Jesus Christ and the New Testament. But, sadly, there are many others who are not. Rorty’s pessimism was not completely unfounded.
Things would have been much different, though, if the ideas of Rorty’s grandfather had been implemented more widely, rather than being largely rejected by the fundamentalists of the 1920s and afterward.
Posted by LKSeat at 5:56 AM