New Hope in the Killing Fields

You all have probably heard the term “killing fields” used to describe the horrendous atrocities committed in Cambodia in the 1970s. And maybe most of you have seen the heart-rending movie released in 1984 with that title.

“Killing Fields” won three Academy Awards, including Best Supporting Actor by Haing S. Ngor, who was himself a survivor of the Khmer Rouge regime and the labor camps. Prior to the Khmer Rouge’s “Year Zero,” he was a medical doctor based in Phnom Penh.

But in 1975, Ngor was one of millions who were relocated from the city to forced labor camps in the countryside. He spent four years there before fleeing to Thailand.

Pol Pot (1925-98) was the diabolical leader of the Khmer Rouge, which slaughtered nearly a fourth of the Cambodian people between 1975 and 1979. He died and is buried in the Anlong Veng District of northern Cambodia. One of the many “killing fields” was in that area.

But now there is a new church building in a small village in Anlong Veng, and it was my privilege to speak at the dedication service for that beautiful new building last Friday.

The name of the new structure is New Hope Church. Through a strange string of connections, it was given that name because of New Hope Church in Worth County, Mo., which was my father’s home church.


A Japanese friend suggested that name, remembering it from when we took her to north Missouri in the fall of 2005. She also financed the project, and her husband drew the plans and supervised the construction of the new church building in Anlong Veng.
The dedication service was an elaborate affair, attended by well over three hundred people, with far more than half of them children. At the beginning and near the end of the service, some of the local children performed traditional Cambodian dances.
My message was based on Romans 5:1-5, and I titled it “New Hope for Anlong Veng.” Nhao Troeun, a fine young Cambodian man who works with the Food for the Hungry organization, translated the sermon into Cambodian. 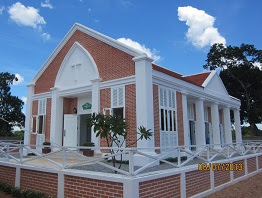 New Hope Church in Anlong Veng will be used for the ministry of Missionary Hwang Ban Suk from Korea. Through a Korean business partner, my Japanese friend became acquainted with Missionary Hwang’s sister and her husband, who is a pastor in Seoul (and where I had the joy of preaching on June 2). Through that connection she learned about the work of Missionary Hwang and ended up building the new church for his ministry.

Last Friday after “dinner on the grounds,” attended by most of the adults who were at the dedication service (the children had to go back to school), I went with my Japanese friends (seven in all) to visit the nearby area where Pol Pot died and is buried. It was about a 20-minute drive from New Hope Church and less than a mile from the Thai border.

During the years Pol Pot and the Khmer Rouge controlled Cambodia, most of the people who were not killed lived in fear, great physical need, and a general state of hopelessness.

Although the political situation has improved considerably in the last 20 years, there is still widespread poverty throughout most of the rural areas. With the new church building now ready for use in his ministry Missionary Hwang will be even more effective in fostering new hope in the hearts of the people of Anlong Veng, one of the former killing fields in Cambodia.
Posted by LKSeat at 5:00 AM