On the Verge of World War III?

Increasingly, it looks as if the question is not If but When. And the question is about a preemptive attack on Iran, seeking to destroy their capability for developing nuclear weapons.
Back in February a group of U.S. Senators pledged, “If President Barack Obama feels the need to launch a military strike against Iran's nuclear program, Congress will back him.” Last Saturday (Sept. 22), the U.S. Senate, by a 90-1 vote, passed that non-binding resolution.
The Huffington Post headlined their news story about the Senate resolution, “Senators Offer License To Strike Iran Nuclear Program.” The resolution, however, “specifically states that it should not be interpreted as an authorization for the use of military force or a declaration of war.”
Nevertheless, on September 11 Secretary of Defense Panetta said on CBS's “This Morning” program that “the United States has the capability to prevent Iran from building an atomic bomb.” He added, “We have the forces in place to be able to not only defend ourselves, but to do what we have to do to try to stop them from developing nuclear weapons.”
Preemptive attacks, though, can go either direction. According to a September 24 story on NBCNews, “Iran could launch a pre-emptive strike on Israel if it was sure the Jewish state [was] preparing to attack it, a senior commander of its elite Revolutionary Guards was quoted as saying on Sunday.
“Amir Ali Hajizadeh, a brigadier general in the Islamic Revolutionary Guard Corps, made the comments to Iran’s state-run Arabic language Al-Alam television, according to a report on the network’s website.” 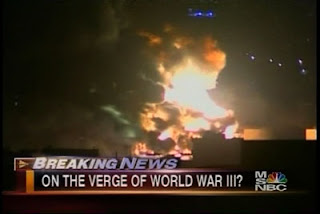 The same story goes on to say that “Hajizadeh, who heads the Guard’s aerospace division, said any attack on Iranian soil could trigger ‘World War III’” (emphasis added).
Talk about World War III is probably a hyperbolic way of talking about the volatile situation in the Near East. But those who think that a preemptive strike on Iran, with or without U.S. approval and/or cooperation, will be a soon-finished affair (another Six Day War) are probably greatly mistaken.
If an obscure YouTube video can spark angry attacks on U.S. embassies in Libya and elsewhere, what would a pre-emptive attack on Iran do? Assuming that a quick strike on Iran’s nuclear plants destroyed their intended targets quickly, which is by no means a certain assumption, why would we possibly think that would be the end of the matter?
I have been somewhat worried over the last few months that the President would launch, with Israel, an attack on Iran. Somewhat cynically, perhaps, I thought that was a possibility partly because it would increase the likelihood of the President’s reelection.
If the President is not reelected, there is a strong likelihood that an attack on Iran will be launched much before this time next year. The Republicans have long been critical of the President’s lack of support for Israel—and vocal in their willingness to keep Iran from developing a nuclear weapon by military means.
As far back as the Republican presidential primary debates last November, Romney declared, “If we re-elect Barack Obama, Iran will have a nuclear weapon. And if you elect Mitt Romney, Iran will not have a nuclear weapon.”
Even though it would probably not lead to World War III, I strongly believe that a preemptive attack on Iran would be a grave mistake. One of the many reasons I will be voting for Obama again in November is because I think that such an attack would be considerably less likely with him as President.
Note: I found “What if Israel bombed Iran?” in the 9/21 Washington Post to be a quite thought-provoking op-ed article; you can access it here.
Posted by LKSeat at 5:47 AM