Talk about a contrast! Last week I went to see the movie “2016: Obama’s America” on the same day the Democratic National Convention began. Both the movie and the convention centered on President Obama, but the evaluation of the same man was greatly different, to say the least.

“2016” is a documentary, or an infomercial, produced by Dinesh D’Souza, a conservative political commentator and author who (since 2010) is president of The King’s College in New York City. Born in Mumbai, India, D’Souza (b. 1961) came to the U.S. as an exchange student and graduated Phi Beta Kappa from Dartmouth College in 1983. In the 1980s he was for a time a policy advisor for President Reagan.

D’Souza is the author of numerous books, his most recent being Obama’s America: Unmaking the American Dream (2012). That book is said to reveal “how President Obama's recent actions prove his anti-colonialist roots and predicts how much worse America will be if President Obama wins a second term.” D’Souza’s movie is based on his book. 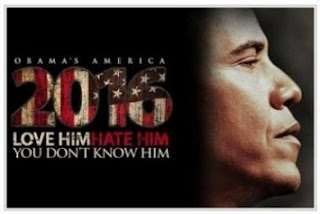 “2016” is already the highest grossing conservative documentary of all time, and has just surpassed “An Inconvenient Truth” and is now in sixth place on the list of all documentaries. Widespread publicity helped to boost attendance.
For example, Sean Hannity strongly and repeatedly recommends it. (That was one main reason I was disinclined to go see it.) Hannity begins each segment of his radio broadcasts with a statement of his intention to make Obama a one-term President. He evidently thinks “2016” will help achieve that goal.
On the last day of the Democratic National Convention that climaxed with President Obama’s acceptance speech, I happened to see that day’s issue of USAToday. I was amazed to find a full page ad for “2016” in section A.
Last month I received an e-mail from a retired Baptist minister whom I have known since we moved to Liberty in 2005. He wrote that he and his wife “just got home from seeing the movie: ‘2016: Obama’s America.’ It makes no difference what your political views are the move is a MUST to see.”
One of my Thinking Friends also recommended the movie. When I told him I was disinclined to see it, he wrote back, “D’Souza has a similar background [to] Obama and this makes it even more effective. I felt he was fair to Obama and seemed to stay with facts and not cheap shots like both sides have been doing.”
Even though I was prejudiced against the movie, because of my friends’ recommendations and urging I decided to go see it at the local theater here in Liberty. When I left the theater, though, I was more convinced than ever that it was a piece of well-produced propaganda. There were some factual errors, but mostly my complaint is that the movie is filled with grossly misleading half-truths, deceptive insinuations, and highly speculative assertions.
If people are opposed to the President and his ideas or policies, so be it. People have a right to their own opinions. But I urge people to base their support for or rejection of political leaders on accurate knowledge of the facts, rational analysis of the issues, and clear-headed appraisal of those leaders’ political positions.
______
[For a good review and factual analysis, see “‘2016: Obama’s America’ Fact-Check” here.]
Posted by LKSeat at 6:08 AM