Fukuoka is written with two kanji (Chinese characters): fuku that means good fortune and oka that means hill. So literally Fukuoka means the hill of good fortune. (Most Japanese names have one kanji that refers to something in nature; for example, the shima in Hiroshima means island and the saki in Nagasaki means cape.)
Fukuoka is a well-known name in Japan, mainly because it is the name of one of the nation’s 47 prefectures as well as the name of one of the major cities in the country.

For 36 years June and I lived in Fukuoka City, Japan. It is the major city of Fukuoka Prefecture, which has a population is just over 5,000,000 (just about the same as Colorado). According to Fukuoka’s English website, “The Prefecture offers excellent living and education environments, which help residents to live a relaxed life.” (There are 39 colleges and universities in the Prefecture.) 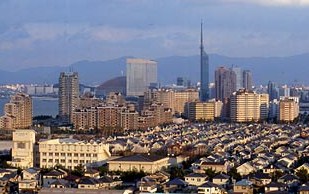 Fukuoka City is the seventh most populous city in Japan with a population now near 1,500,000. Yet in 2012 Monocle, the global affairs magazine, ranked Fukuoka as the 12th of the world’s most livable cities. The modern city was formed in 1889, with the merger of the former cities of Hakata and Fukuoka. (To this day, Hakata Station is the city’s main train station.)
There are also people whose family name is Fukuoka. One such person is Mrs. Kikuko Fukuoka, a friend who arrived at Kansas City International airport last night and who will be spending the weekend with us. It is a special joy for June and me to welcome Mrs. Fukuoka as a house guest. We have known her for many years, and she has a special meaning for our missionary career.
On Easter Sunday in 1980, we started what became the Fukuoka International Church. At first the small congregation met in our missionary residence. After moving to rented facilities with more space and easier access, more people began attending. One of those was Mrs. Fukuoka.
Over time, Mrs. Fukuoka, who had lived for a time in the United States, became more and more interested in, and gained more understanding of, the Christian faith. Subsequently, she made a profession of faith, and I had the privilege of baptizing her. It was a special time for her but also for the congregation. She was the first person to receive baptism after the beginning of the new church.
Mrs. Fukuoka was four years old at the conclusion of World War II, and her family lived in China (as did many Japanese during the war years). Having to go back to a devastated country after the end of the war was extremely difficult for those families. Some Japanese parents thought the best thing for their children was to leave them in China to be raised by Chinese families there.
It was an emotional time for Mrs. Fukuoka back in the 1990s, when a number of Japanese who had been left in China at the end of the war came to visit for Japan for the first time (or the first time as adults). She shared with us how she could easily have been one of those people who had been left behind.
During the 20 years we were together in the Fukuoka International Church, Mrs. Fukuoka was a faithful church member. Maybe partly because of her own experiences in the 1940s, she has regularly been a compassionate friend to many people needing comfort and encouragement during difficult times.
June and I are happy this weekend once again to be with our friend, Mrs. Fukuoka of Fukuoka, Fukuoka.
Posted by LKSeat at 5:48 AM