Barton Up the Wrong Tree

Maybe I had heard of him before, but my real introduction to David Barton came at the annual meeting of the Missouri Baptist Convention in the fall of 2004. Barton (b. 1954), who is not a Baptist nor from Missouri, was the keynote speaker at the final session of that convention. It didn’t take me long, though, to disagree with what I heard Barton say. 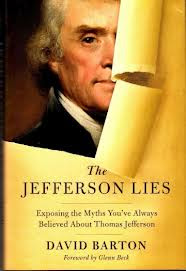 Barton’s newest book is The Jefferson Lies: Exposing the Myths You’ve Always Believed About Thomas Jefferson (2012). Unfortunately for Barton, his book, which had become a bestseller, contains so much questionable material (so many lies?) that the publisher decided last month to cease publishing it.
According to Barton, “Lie #1” about Thomas Jefferson is that he fathered Sally Hemings’ children. He concludes that there is “absolutely no historical, factual, or scientific evidence to tarnish the sexual morality of Jefferson” (p. 193).
However, even though Barton twice cites the Thomas Jefferson Foundation (TJF) Research Committee Report on Thomas Jefferson and Sally Hemings (2000), he fails to mention that according to their website the TJF and “most historians believe that, years after his wife’s death, Thomas Jefferson was the father of Sally Hemings’ six children.”
But I am not all that concerned about whether or not Jefferson fathered Sally’s children. As always, it is a politician’s public positions, not his/her private life, that is of greatest importance.
Of all the “lies” Barton discusses, I am most interested in “Lie #5: Thomas Jefferson Advocated a Secular Public Square through the Separation of Church and State.” There Barton claims, among other things, that the whole “history of the separation doctrine centered around preventing the State from taking control of the Church. . . . Throughout history, it had not been the Church that had seized the State but just the opposite” (p. 121).
But state churches and church-dominated states have persecuted minorities through the years. Catholic states in Europe persecuted Jews and “heretics” by the Inquisition, the Reformed Church influenced the Zurich city council to persecute the Anabaptists, the Anglican Church as the established church in England persecuted the Nonconformists (as well as Catholics), the Anglican-dominated colony of Virginia persecuted Baptists (among others), and so on.
Then there is the whole question of the freedom from religion, which Barton and his supporters seem to be opposed to. His desire to protect the privileged status of Christianity and to suppress the equality of non-Christians in American society seems to be the main reason for his calling the separation of church and state a myth (as he has done through the years; he authored a book first published in 1989 under the title The Myth of Separation).
Religious freedom, though, must be for all people and must also include freedom from religion. For that reason, I strongly favor the proper separation of Church and State (as I believe Jefferson did). That doesn’t necessitate the separation of faith and politics, but it certainly does mean freedom of, or freedom from, religion for all citizens.
Note #1: Warren Throckmorton and Michael Coulter’s Getting Jefferson Right: Fact Checking Claims about Our Third President has recently been published to rebut Barton’s book.
Note #2: I have recently been involved in an ad-hoc group seeking to revitalize the Kansas City chapter of Americans United for the Separation of Church and State.
Posted by LKSeat at 6:10 AM