To put it mildly, I am not a big fan of Calvinism. It came as a surprise, then, when I learned that a noted contemporary theologian and progressive seminary administrator is a great admirer of John Calvin’s theology. That theologian is Serene Jones, president since 2008 of Union Theological Seminary in the City of New York.
The Five Points of Calvinism
Long ago I was taught, and then through the years I taught, that the five main emphases of Calvinism can conveniently be summarized by the five letters of “tulip.” That is, Calvinism is primarily about theological beliefs that stress
Total depravity
Unconditional election
Limited atonement
Irresistible grace
Perseverance of the saints
Growing up as a Southern Baptist, I heard some about the T and a lot about the P of TULIP, but little of the middle three terms--and while in seminary, I came to reject the traditional Baptist idea about the fifth term, which was usually expressed as “once saved, always saved.”
Actually, these “five points of Calvinism” were summarized after Calvin’s death in 1564 (at the age of 54) at the Synod of Dort (1618–19), convened by the Dutch Reformed Church to settle a divisive controversy initiated by the rise of Arminianism.
The latter theology, named for Dutch theologian Jacob Arminius (1560~1609), particularly opposed the Calvinist emphasis on predestination (unconditional election). More than a century later Arminianism was endorsed by John Wesley and has through the centuries since been the underlying theology of Methodism/Wesleyanism.
Serene’s Calvinism
About ten weeks ago, Serene Jones’s new book Call It Grace: Finding Meaning in a Fractured World was published. It is a very honest book, a mixture of memoir and theological reflection, that describes how the author has wrestled theologically with various personal issues. 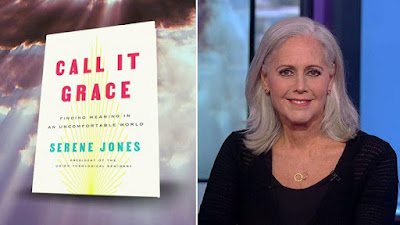 In the Introduction, Jones serenely states: “John Calvin is the one who exerts the most influence on my own theology.” Then she begins Chapter 1 with a brief quote from Calvin.
In the second chapter, Jones tells how in 1994 she was given her grandmother’s copy of the 1559 edition of Calvin’s major work, Institutes of the Christian Religion. But by then, she wrote, she had “already read my newer two-volume version from cover to cover at least half a dozen times” (p. 23).
(I don’t know what version Jones read, but the 1960 version published in The Library of Christian Classics is 1,800 pages long!)
Serene(‘s) Theology
It turns out that the only one of the five points of Calvinism that Jones writes much about is the T of TULIP. Yes, there is a lot about grace from beginning to end--and the last word in the book is, literally, “grace.” But she really does not present it as something irresistible.
She does write a lot about original sin, though, about what Calvinism has long termed “total depravity.” That means that “sin is extensive, persistent, systemic, and collective” and that people are kidding themselves if they think they can get through life “without being tainted by it” (p. 259).
That understanding of sin helped her through the traumas of abuse by her grandfather, repeated verbal abuse by her bi-polar mother, and grief because of a painful divorce.
When I completed the reading of her new book, it seemed clear that now, in spite of the above-mentioned traumas and other trying experiences, Jones has developed a theology which makes it possible for her literally to be a serene (=calm, peaceful) advocate of Calvin’s theology.
On the last day of July, Jones will celebrate her 60th birthday. I wish her well on that special day and pray that she will have many more productive, and serene, years ahead.