In Appreciation of Dvořák

Although I am usually not willing to spend the time and especially the money to attend live performances, I am very fond of classical music. Previously, I have posted blog articles about Beethoven and Rimsky-Korsakov, and I have long wanted to write something about Bach. But this article is about Antonín Leopold Dvořák, the greatest of all Czech composers.
Dvořák’s “New World Symphony”
“From the New World,” also known as the “New World Symphony” or more technically as “Symphony No. 9 in E minor” (Op.95) has long been on my personal list of “top ten” classical music compositions. I was moved by it again as I listened to it while working on this article.
Although Dvořák was born and died in the Kingdom of Bohemia (which became the core part of Czechoslovakia in 1918), from 1892 to 1895 he was the director of the National Conservatory of Music in New York City. It was during that time that he composed the captivating New World Symphony.
For a rural Czech boy, the United States was, indeed, a new world. And Dvořák seems to have set out at once to learn from his new environment. He composed his Symphony No. 9 in the first half of 1893, and he related that he was influenced and inspired by Native American music and Black spirituals when he composed that stirring symphony. 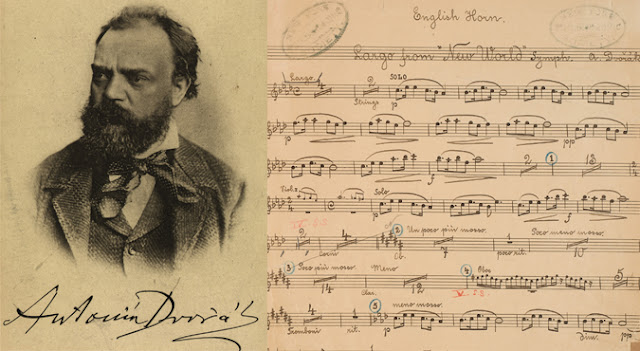 Some of you may remember (I didn’t) that Astronaut Neil Armstrong took a tape recording of the “New World Symphony” along during the Apollo 11 mission, the first moon landing, in 1969.
Dvořák’s Old World
Born in 1841 in a humble country village, Dvořák referred to himself as “just an ordinary Czech musician.” Both his father and grandfather were butchers, but he was sent to a music school in Prague when he was 16. There he studied violin and viola.
In the 1870s, his musical compositions elicited the attention of Johannes Brahms, who was only eight years his senior but already a noted composer. That acclaim led to public recognition for his compositions inspired by the folk music of his native land.
Book One of “Slavonic Dances” (Op.46) was published in 1878. It became highly popular--and has remained so to the present.
In the following years, before going to the U.S., Dvořák composed some of his greatest pieces--works that I like almost as much as “New World Symphony”: Symphony No. 7 (Op.70 in 1885), Symphony No. 8 (Op.88 in 1890), and the Carnival Overture (Op.92 in 1891).
Dvořák’s Transcendent World
The three compositions just mentioned are exuberant pieces manifesting Dvořák’s joy of life. But he was also a man who knew sorrow and deep sadness. At such times he found solace in his Catholic faith and composed works expressive of that faith in God who, while immanent in this world, transcends the world.
In 1877 he wrote “Stabat Mater” (“Sorrowful Mother Is Standing”), a prayer about Jesus’ mother Mary by his cross.
In a short period of time, Dvořák and his wife had lost three small/infant children. But despite the personal tragedy he had experienced, he refused to allow despair to overwhelm him. Rather than resignation or hopelessness, in that masterpiece, Dvořák’s listeners look through a veil of tears and see faith in life.
Dvořák often attributed his musical talents as being “a gift from God.” Upon the completion of one of his settings of the Catholic Mass, he proclaimed, “Do not wonder that I am so religious. An artist who is not could not produce anything like this.”
A few years after returning to Prague, Dvořák died at age 62. He was buried 115 years ago today, on May 5, 1904.