As has been widely covered in the news media, yesterday was the 100th day since the inauguration of Donald Trump as the 45th President of the United States of America. What can be said about these 100 days from the standpoint of ethics and religious faith?
SEPARATING ETHICS/RELIGION AND POLITICS
One of my good friends from way back recently sent me an email with this candid statement: “I do wish you were a bit less hard on the Right & Republicans, but I realize we are all partial.”
Here is part of my response:

To the best of my ability, I write what I do because of my Christian faith not because of any political affiliation. And if I am partial, it is, I hope, partiality to the teachings of Jesus. If I am hard on the Right & Republicans it is because of what seems to me to be their words and/or actions that contradict the teaching (and the spirit or Spirit) of Jesus.

It is in that vein that I have sought to make an ethical analysis of DJT’s first 100 days in office—and on May 12 I am scheduled to give a talk and lead a discussion on that topic at the regular meeting of a group known as Provocateurs and Peacemakers. (Here is the link to a promo for that meeting.) 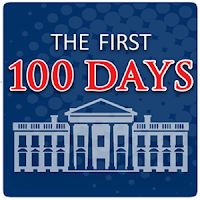 SOME OF MY MAIN POINTS


Obviously, I can’t write in 600 words here all that I will have from 60 to 90 minutes to present on May 12, so I have selected only a few points that I plan to emphasize in my upcoming (and as yet unfinished) talk.
There are many specific questionable ethical statements/actions of DJT that could be mentioned, but here I will just indicate some of the general or catch-all issues:
1) In the realm of personal ethics, DJT’s propensity for telling falsehoods is a major problem. From his statements on Day 2 about the size of the inauguration crowd, outright lies or misleading statements have been numerous, and troubling, throughout his first 100 days in office.
2) DJT’s (and his children’s) use of his (their) position to make money for the Trump family also seems highly unethical. His (their) trips almost every weekend to his privately owned resort and his conducting official business and entertaining heads of other nations there further raises serious ethical questions.
3) This month, DJT’s launching Tomahawk missiles against a Syrian air base and dropping a MOAB on Afghanistan as a show of power is ethically questionable and potentially dangerous. Those bombings had little apparent effect in Syria or Afghanistan. Their use, however, perhaps encourages Kim Jong-un to use his weapons against the U.S. before missiles or bombs are preemptively used against North Korea.
4) There are also ethical questions about several other matters: for example, his proposed budget, his support of repealing the ACA without a suitable replacement, and his proposed ban on visitors from Muslim countries and refusal to accept refugees from Syria.
5) There are also problems with his various actions that dismantle protection of the environment. In the long term, failure to protect the environment may be one his greatest ethical errors.
ONE OF MY MAIN HOPES
From what DJT has said and done in these past 100 days, it is hard to be hopeful that things will get better in the months and years ahead. But there has, thankfully, been softening of some positions which seemed to be ethically questionable.
My main hope is that the widespread resistance to and protests against the many unethical positions of DJT will continue, and will become even more effective.
Posted by LKSeat at 5:34 AM