A Woman in the House

Currently, there are 83 women who serve in the United States House of Representatives. That is 19.1% of the 435 House members, and about 3/4 of those 83 are Democrats. There have not always been women in the House, however.
THE FIRST WOMAN IN THE HOUSE
Jeannette Rankin of Montana was the first female to serve in the U.S. Congress. In fact, it was 100 years ago this week that she became the first woman in the House.
Rankin was born in 1880 in Montana Territory, nine years before it became a state. In 1914, women’s suffrage was passed in both Montana and Nevada. They thus became the tenth and eleventh states to give women the right to vote.
Rankin had joined the suffrage movement in 1910 when she was working in an orphanage in Seattle. Partly because of her efforts, Washington voted for women’s suffrage in November of that year. 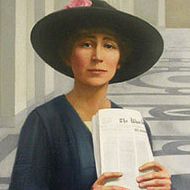 Rankin then moved back to Montana, and in February 1911 she made her case for women's suffrage before the Montana legislature. That was the first time a woman had spoken to that body. It took until November of 1914, but then Montana also decided to allow women to vote.
Rankin decided to run in 1916 as a Republican for one of the two U.S. House of Representatives seats from Montana—and she won! In her first time to vote she voted for herself.
Rankin was introduced in Congress as its first female member on April 2, 1917.
THE FIRST WOMAN’S PACIFISM
On the very day she took office, Pres. Wilson addressed a joint session of Congress and urged a declaration of war against Germany, and on April 6 the vote went to the House.
Rankin was one of 50 representatives who voted against the American declaration of war—and she became the one most criticized for her negative vote.
Knowing she had little chance of being re-elected to the House, in 1918 Rankin ran for the Senate. However, she was unsuccessful. She was then no longer a member of Congress until her election in 1940 to serve once more as a Representative from Montana.
Soon, on Dec. 8, 1941, Congress voted once again on another declaration of war. Also, once again, Rankin voted against going to war—and this time she was the only one to cast a dissenting vote.
She was also once again widely maligned for voting against war. Here was the headline in one newspaper:

Rankin, however, was consistently against war during her long lifetime.
In 1967, at the age of 87 and sixty years after first taking a seat in Congress, she organized the Jeannette Rankin Brigade, an organization that publicly protested against the Vietnam War.
Rankin died in 1973 at the age of 93.
WOMEN IN THE HOUSE NOW
The nation has moved considerably toward women’s equality since 1917—but many would argue not nearly far enough. Perhaps more women would mean a more peaceful country and a more peaceful world.
Not all women are against war the way Jeannette Rankin was. Still, there may be great truth in these words she spoke in 1925:
The work of educating the world for peace is a woman’s job, because men are afraid of being classed as cowards.
Maybe we should also agree with this statement: 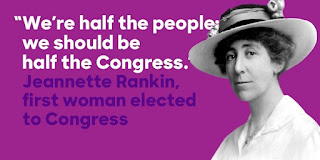 However, not all women are the same. I am not impressed by, nor a supporter of, the two women among the current eight U.S. Representatives from Missouri.
The women I want in Congress are people like Barbara Lee (D-Calif.), who has served in the House since 1998--and like Jeannette Rankin, the first woman in the House.