Tearing Down / Building Up

To quote Mortimer Snerd (whom a few of you may remember), “Who'd a thunk it?” Last Friday the bill to repeal and replace “Obamacare” was pulled from the House floor. Thus, the ACA is still the law of the land “for the foreseeable future,” according to Speaker Paul Ryan.

TEARING DOWN OBAMACARE
For seven years the Republicans have been opposed to the ACA. The U.S. House of Representatives has voted to repeal or amend ACA more than 50 times since it was passed in October 2009.

As Time reported last week, “Republicans took control of the House in 2011, and on January 19 of that year they voted on, and passed, a measure to repeal all of the Affordable Care Act. (It was never considered by the Senate).”

Before and since his election, Pres. Trump has publicly promised at least 68 times that he would lead in repealing and replacing Obamacare. Here is what he tweeted on Feb. 14: “Obamacare continues to fail. . . . Will repeal, replace & save healthcare for ALL Americans.”

FAILING TO BUILD A REPLACEMENT
In thinking about the failure of the American Health Care Act, I was reminded of an anonymous poem that I first heard 60 or so years ago (in spite of a woman claiming on the Internet that her grandfather wrote it in 1967). 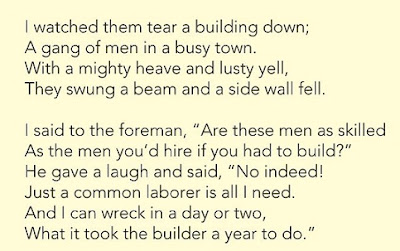 So, where does national healthcare go from here?

PROPOSAL: RENAME AND BUILD UP
The current impasse could be overcome and a new and approved healthcare system could be implemented in this way:

First, Democrats would agree to call an improved healthcare system by the name of the Republican bill that was never voted on: the American Health Care Act. It would no longer be called Obamacare—just as it should probably never have been called that in the first place.

Then, the Republicans would agree to work with the Democrats in improving (building up what is already in place) the parts of ACA which are not working well: making it more affordable for everyone, giving people more choice, continuing to expand the program to cover all Americans, and so on.

Senate Minority Leader Schumer has already indicated willingness to cooperate in the hard work of building a better system. He is reported as saying, “If they [the Republicans] would denounce repeal . . . then we’ll work with them on improving it and making it better.”

Bipartisan efforts to build a better healthcare system is, doubtlessly, what the vast majority of the American people want—although it would still be opposed by those on the far right.

The latter would, also doubtlessly, continue to oppose having the federal government directly involved in healthcare, having equal or greater demand for taxes to pay for the continued (or expanded) program, and of not having tax breaks for the wealthy.

Constantly opposing any plan to tear down the current system and thus deprive millions of people from healthcare coverage, citizens who are concerned about all the people in our nation must demand that Congress build up (repair) the current healthcare system so it is better for all.
_____
THE REST OF THE POEM
For those of you who may be interested, here is the rest of the poem cited above: