Retired clergy of the greater Kansas City metropolitan area have monthly meetings, and I often attend those enjoyable lunch gatherings.
FANNIE LOU HAMER WOMEN’S COMMITTEE
Bridget and Fran were the guest speakers at the March 14 (yesterday’s) retired clergy meeting. They have been workers in the fast-food industry for several years and both are active in the organizations known as Fight for $15 and Stand Up KC.
Neither woman has any worker benefits or health insurance. In addition, Fran has serious health issues, and she and her children are homeless.
Both women are members of the Fannie Lou Hamer Women’s Committee (FLHWC).
According to Stand Up KC’s website, FLHWC was formed in Oct. 2014 in order “to create a place where women can organize around the special issues” that they face as people in low-wage jobs, issues such as “discrimination, harassment, and lack of paid maternity leave.”
WHO WAS FANNIE LOU HAMER?
Many of you may have long been familiar with the name of Fannie Lou Hamer, but for some reason I don’t remember her name from the 1960s and ’70s when she was one of the most important advocates for civil rights in the U.S.
Fannie Lou was born in October 1917, the youngest of twenty children of Jim and Ella Townsend, who were sharecroppers in the Mississippi Delta. She began working in the cotton fields when she was six and was only able to go to school through the sixth grade.
In 1942 Fannie Lou married Perry (“Pap”) Hamer, and although they adopted two daughters, Fannie never became a birth-mother.
Fannie Lou bravely sought to register to vote in 1962. Upon returning to the plantation the owner would not allow her to remain there, so she had to leave her husband and family. That is when she was courted by and, consequently, began to work for the Student Nonviolent Coordinating Committee.
The following year when returning from a voter’s registration training meeting to her hometown of Ruleville, Miss., she was badly beaten in Winona, where the bus had stopped. She suffered from those wounds for the rest of her life.
For the next fourteen years, though, she became “the spirit of the civil rights movement.” (Her compelling story is told in detail in Kay Mills’s book This Little Light of Mine: The Life of Fannie Lou Hamer (1993)
Fannie Lou died 40 years ago yesterday, on March 14, 1977, at the age of 59. Her tombstone is engraved with one of her famous quotes: 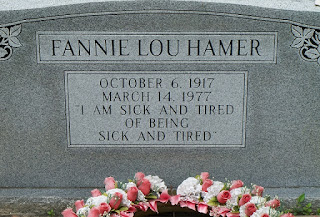 INSPIRED BY FANNIE LOU HAMER
While Fannie Lou’s main fight was against racism in Mississippi and in the nation, she was also a fighter against poverty—as was Martin Luther King, who launched the Poor People’s Campaign in 1968.
It was also in 1968 that Hamer started what she called a Pig Bank, and the following year she established the Freedom Farm Cooperative.
It is partly for that reason that the Fannie Lou Hamer Women’s Committee say on their website,
She knew that things only change in this country because people stand up to fight for what’s right. . . . We see her as an inspiration to continue our fight for collective rights.
We fight for economic dignity because, like Fannie Lou Hamer famously said, we are “Sick and tired of being sick and tired.”
When I chatted briefly with Fran after the meeting yesterday, she told how she and others who are struggling for better wages in Kansas City continue to be inspired by Fannie Lou.
I hope we can all be inspired by Fannie Lou Hamer to do more in support of women like Fran and Bridget.