Vern Barnet has long been one of the outstanding religious leaders of Kansas City. The accompanying picture was taken of him at the 2016 Annual Interfaith Community Thanksgiving Dinner, held for the first time on the campus of William Jewell College.
The Barnet Award
At that most enjoyable gathering on Nov. 13, the Vern Barnet Interfaith Service Award was given to Lama Chuck Stanford, a retired Tibetan Buddhist leader who has long been active in Kansas City. 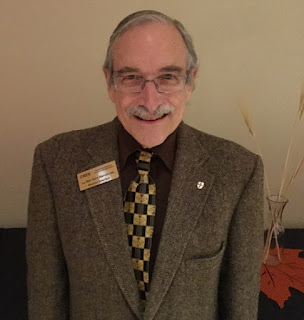 Barnet founded the Kansas City Interfaith Council in 1989, and after his retirement as head of that organization, the Vern Barnet Award was created in 2010—with him as its first recipient.
(Last year’s recipient of the award was my good friend Ed Chasteen, former professor of sociology at William Jewell College. June and I enjoyed sitting at the same table with Ed and his wife Bobbie at last week’s Thanksgiving dinner.)
For many years Vern (b. 1942) served as a Universalist Unitarian minister, and he is minister emeritus of the Center for Religious Experience and Study (CRES), which he founded in 1982. In 2011, however, he was baptized in an Episcopalian church, and is now said to be an active Episcopalian layman.
His main love, though, still seems to be interfaith activities.
The Barnet Book
Vern is also an editor and author. He co-edited the 740-page Essential Guide to Religious Traditions and Spirituality for Health Care Providers (2013). The most recent book he authored, however, is not directly about religion.
Vern’s book Thanks for Noticing: The Interpretation of Desire was published in 2015. He describes the book as a “prosimetrum of 154 sonnets, glosses, and other commentary, in which the sacred beauty of sex and love is explored.” (A prosimetrum is “a text composed in alternating segments of prose and verse.”)
Vern’s sonnets are consciously linked to Shakespeare’s 154 sonnets. But, to be honest, I am over my head in trying to expound upon the meaning and significance of either Shakespeare’s or Barnet’s sonnets. But I have been moved by many of Vern’s sonnets I have read.
For full disclosure, I must admit that I have not read nearly all of Vern’s book, although I do intend to keep reading it little by little--which is the way it needs to be read. Thanks for Noticing is quite obviously a brilliant book as well as a very erudite one.
Barnet’s Sonnets 78 to 86
The 154 sonnets in Vern’s book are grouped into eight sections with titles taken from the parts of a Catholic mass. The most theological part is the one titled “Credo,” and those sonnets, numbers 78 to 86, are the ones to which I have paid the most attention.
(Many of the 154 sonnets are about sex and sexuality, and I will leave it to others to write about the meaning and importance of those.)
Sonnet 78 is titled “Advent,” and as next Sunday, Nov. 27, is the first Sunday of Advent I have read and re-read that insightful sonnet—although the Eucharist does not have the same meaning to me as it does to Episcopalians or Catholics.
“Postmodern Faith: What is Truth?” is the title of Sonnet 84, and it ends with this couplet:
I know the Gospel is a pious tale,
But who cares facts when worship cannot fail?
By these words Vern seems to urge us to a pre-modern/post-modern “mysticism” that is not fettered by facticity. Direct experience of God (Ultimate Reality) is more than, and far greater than, having (or seeking) only factual knowledge.
That is one important lesson bundled in Barnet’s brilliant book.