Economic Justice for All

This month’s election was full of ironies. One was that many blue collar voters in the so-called Rust Belt were so worried about their stagnant, or disappearing, wages that they voted for a billionaire who has a history of mistreating workers to be their rescuer.
Another irony is that neither of the presidential candidates made much mention of a major problem in the U.S.: poverty and the lack of what some term “economic justice.” In spite of all that was said from both sides, there was little attention given to the worrisome conjoined twins in contemporary USAmerican society: racial injustice and economic injustice.
The Bishops’ Document
Ten years ago, Diana Hayes gave the annual Romero Lecture in Camden, New Jersey. The title of that significant talk was “The Color of Money: Racism and the Economy.”
Dr. Hayes is an outstanding person: she was the first African-American woman to earn a Pontifical Doctorate in Theology, and until her retirement in 2011 she was Professor of Systematic Theology at Georgetown University.
In her 2006 lecture, included in the book Romero’s Legacy (2007), Hayes introduced “Economic Justice for All: Catholic Social Teaching and the U.S. Economy,” a document the National Conference of Catholic Bishops adopted in November 1986. 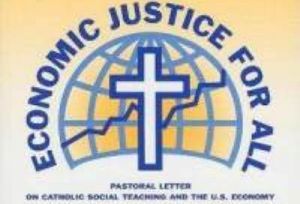 Ten years later the same Conference issued a new document: A Decade after Economic Justice. In the “Introduction” the bishops noted three nations in our midst: one “prospering and producing in a new information age,” one “squeezed by declining real incomes and global economic competition,” and the third “an American underclass.”
My guess is that in this month’s election a majority in the first nation voted for Clinton, a majority in the second nation voted for Trump, and a great many in the third nation didn’t vote at all.
Six moral principles
In the original document issued 30 years ago, the bishops set forth six moral principles—all of which still need to be considered conscientiously today:

Every economic decision and institution must be judged in light of whether it protects or undermines the dignity of the human person.

Human dignity can be realized and protected only in community.

All people have a right to participate in the economic life of society.

All members of society have a special obligation to the poor and vulnerable.

Human rights are the minimum conditions for life in community.

Society as a whole, acting through public and private institutions, has the moral responsibility to enhance human dignity and protect human rights.

Concerning the fifth principle, the bishops quoted Pope John XXIII, who stated that “all people have a right to life, food, clothing, shelter, rest, medical care, education, and employment.” The bishops then explained that this means that “when people are without a chance to earn a living, and must go hungry and homeless, they are being denied basic rights.”
A small step forward?
Given the problem of economic injustice in the nation, the lingering question is, What can be done?
Ten years ago Hayes averred that justice is not being done when a “million or so have slipped into poverty because of our refusal to raise the minimum wage” (p. 87). One presidential candidate did promise to reverse that refusal. Unfortunately, she lost.
Under the new President-elect and Republican Congress, raising the minimum wage doesn’t seem likely to happen, nationwide at least. However, in the Nov. 8 election voters in four states did approve raising the minimum wage—a small step in the right direction.

Then yesterday (Nov. 29) there were widespread strikes and rallies pushing for increasing the minimum wage—perhaps another small step forward in the struggle to create economic justice for all.