Standing with the Losers

The long, acrimonious U.S. presidential election is over—and with an inexplicable result. The man whose election was unexpected by most and unthinkable by many is now two months away from becoming the 45th POTUS.
Winners and Losers
Who are the winners and losers of Tuesday’s shocking election? You know how the election turned out for the candidates, but who are the groups of persons who won and lost?
It seems quite clear that the main winners of the election (by how they voted) are white men, conservative Christians, and people with limited education. More than those of other demographic groups, they seem to be the victorious ones.
It also seems quite clear that the main losers of the election (by the voting results) are women, the poor, African-Americans, Hispanics, LGBT people—and probably the U.S. as a whole.
In his infamous statement regarding John McCain (in July 2015, here), the President-elect said, “I don’t like losers.”
It remains to be seen how the new President will treat, or mistreat, my list of losers. Perhaps it will not be as bad as many of us fear. Perhaps it will be a lot worse than those who voted for him think. Only time will tell.
Standing with the Losers
Since my prior article was about voting for justice, I here state clearly that I am standing with the losers that I mentioned above and am committed to continuing work for greater justice for those in each group.
Perhaps it somewhat overstates my stance, but I agree with the following statement which I saw on Facebook early Wednesday morning: 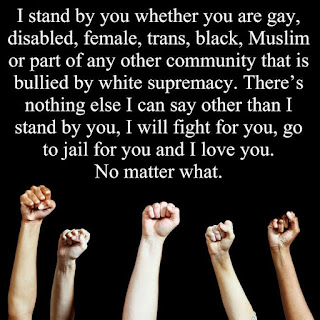 Speaking of Facebook and one group of losers, LGBT people, here are posts from two Facebook friends. One, a gay college student, wrote to his family members who voted for Trump: “I hope your racist bigotry toward Mexicans was worth risking my livelihood as a gay man. You frankly disgust me.”
Then there is this that Robert, a gay Hispanic man who attends the same church I do, posted on Facebook: “If you voted for Trump . . . delete me from Facebook. . . . . a vote for him is a vote for my destruction as a human being.”
I stand with these two friends—and with other losers in Tuesday’s election. I will continue to advocate social justice for them all, and I hope you will, too.
The Arc Bends toward Justice
On Wednesday morning I read an excellent article on Vox.com: “America is not, it turns out, better than this.” At the beginning of that piece the writer tells about President Obama’s new (2010) Oval Office rug.
There are five quotations embedded in that rug. One is that of abolitionist Theodore Parker as paraphrased by MLKing, Jr.: “The Arc of the Moral Universe Is Long, but It Bends Toward Justice.”
In my book The Limits of Liberalism (see p. 106) I was a bit critical of Parker’s words as they tend(ed) to feed into the over-optimism of some forms of liberalism. Things are not inexorably getting better and better every day in every way.
As the writer or the Vox article acknowledges, sometimes there are “kinks in the arc.” Tuesday’s election was, I fear, a major kink, a sizable setback for justice in this country—and I may not live long enough to see all the negative effects of this election bent fully back to even present-day justice levels.
So, while I am greatly disappointed in the outcome of the election, my disappointment is not primarily that Ms. Clinton and the Democrats lost. My great sorrow is for the losers who will quite likely encounter increased injustice.
Posted by LKSeat at 5:28 AM