What about Pence for VP?

Donald Trump was scheduled to announce his pick for a running mate this morning, but that has reportedly been postponed. Assuming Trump will be confirmed as the Republican nominee in Cleveland next week, the person he announces, whenever that is, will become the nominee for Vice President.


Although he may surprise many people, including me, Trump will most likely announce Indiana Governor Mike Pence as his VP choice. And this seems to be a good pick, better than the others said to be on his short list. 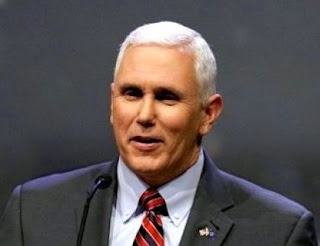 Yesterday the Washington Post posted an online article titled “Mike Pence is everything Donald Trump is not.” The article is by Andrew Downs, director of the non-partisan Mike Downs Center for Indiana Politics at Indiana University-Purdue University.


In Downs’s opinion, Pence would balance the Republican ticket in almost every way. I think that is an accurate assessment.


Quite clearly, Pence is at least many of the things Trump is not: youngish (he turned 57 in June just a week before Trump turned 70), the husband of one wife (as opposed to Trump’s three wives), an articulate speaker (here is the C-Span link to this year’s “State of the State” address), and a seasoned politician with 12 years in the U.S. House of Representatives and now in his fourth year as a state governor.


In addition, while Trump’s Christian, and especially his evangelical, credentials are somewhat questionable, Pence is clearly a committed Christian believer. He self-identifies as a Christian, a conservative, and a Republican—and “in that order,” he says.


Pence was raised Catholic, but in the spring of 1978, while in college and still 18, he had a deep spiritual conversion that eventually led him to become an evangelical Christian.


He was also a Democrat when a young man. In 1980 when he voted in his first presidential election at age 21, he voted for Jimmy Carter.


Pence as the VP candidate should help Trump snare most of the white evangelical vote—although a Pew Research article posted yesterday indicated that already 78% of such registered voters would vote for Trump—5% more than said at this time four years ago that they would vote for Romney.


He has been called “a favorite hard-core conservative.” He takes a very strong anti-abortion rights position and in 2011 he led the federal government to the brink of shutdown in a failed attempt to de-fund Planned Parenthood.


Pence is also strongly anti-gay and was a supporter of the Religious Freedom Restoration Act (RFRA) in Indiana—at least until it became necessary for him to waffle because of economic considerations.


He signed RFRA on March 26, 2015, and there was an outcry that the bill was discriminatory against gays and lesbians. So a week later he signed a bill that acted as an amendment intending to protect LGBT people.


Signing the first bill angered many Hoosiers who are not evangelicals, and signing the second bill angered many who are conservative Christians. Partly because of that issue, Pence doesn’t have a high approval rating in Indiana at this time (only about 40%).


Last week at the Dearborn [Mo.] Christian Church I led the adult Sunday School class discussion about “Christians and the 2016 elections.” One woman remarked that she thinks it is important for people to consider carefully who the candidates for Vice President are as well as who the nominees for President are. I agree.


Even though I wouldn’t vote for Trump regardless of who he picked for VP, Governor Pence is probably a good choice for the Republican Party.
Posted by LKSeat at 5:27 AM