Either Hillary Clinton or Donald Trump will be the next President of the United States, barring some completely unforeseen and/or truly tragic event occurring between now and next January 20.
There are, however, historically large percentages of voters who dislike both Hillary and the Donald. Consequently, many people say they will vote for neither. Some won’t vote at all, and others will vote for a minor party candidate.
But choosing either of those options is highly questionable.
For those on the left, there may be much that is attractive and appealing in the positions of Jill Stein. But she will not be elected President this fall. Single digit support at the end of July will not turn into 270 electoral votes in November. That just isn’t going to happen.
And what possible good would not voting do?
So this is where talk about voting for the “lesser evil” is pertinent. (I started thinking about this article months ago after reading “Lesser-Evilism We Can Believe In,” an article in The Nation, and I urge all of you anti-Hillary progressives to read it.)
There is, admittedly, a problem with the term. As some say, “evil is evil” and should be rejected. Long ago Charles Spurgeon, the famous British Baptist preacher, advised, “Of two evils, choose neither.”
But that is not necessarily good advice in a binary election.
I have mentioned to several people that I was going to post this article at some point. One of those people later asked about when I was going to write about voting for evil. But that sort of misses the point: voting for the lesser evil is, arguably, good – or at least it is sure a lot better than voting for, or not voting against, the greater evil. 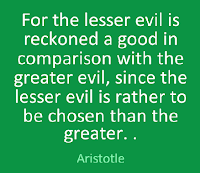 Actually, I am going to vote for the person whom I think will be a very good President. In doing so, I would like to think that I am voting for the greater good rather than for the lesser evil —although, honestly, I find little good in the candidate I am definitely not voting for.
But even for those who don’t like either candidate, surely they see one as better, or worse, than the other. Surely not many think, as someone said to me the other day, “Both candidates are rotten to the core.”
According to the late Joseph Fletcher, Professor of Social Ethics at Episcopal Theological School, “whatever is the most loving thing in the situation is the right and good thing. It is not excusable evil, it is positively good” (Situation Ethics, p. 65).
Even though the candidate I will be voting for has said things and done things I do not particularly like, voting for that candidate is, I believe, “the right and good thing,” and not an “excusable evil.” That is equally true for those who vote for the “lesser evil.”
But why not take the “high moral ground,” as some of my Facebook friends advocate, and vote for a candidate that is clearly better than the either of the two major party candidates?
Voting for a candidate who doesn’t have a chance to win, or not voting at all, helps only the pride (self-righteousness) of the person who thinks they are not stooping to vote for someone not worthy of their vote. (See more about this in another article I highly recommend to progressive anti-Hillary people.)
So why do I advocate lesser evilism? Because any vote not cast for the lesser evil makes it more likely that the greater evil will be elected. Why would anyone want that?