Sorry, Miguel, But Jesus Was a PaciFIST

Miguel De La Torre is Professor of Social Ethics and Latino/a Studies at the Iliff School of Theology in Denver, Colorado. He is a brilliant scholar, prolific author, and past president of the Society of Christian Ethics.
Mainly because he was a Ph.D. student at Temple University at the same time as my daughter Karen, he has become a personal acquaintance and Thinking Friend. (Karen’s essay “Feminist Theology” is one chapter in Handbook of U.S. Theologies of Liberation, a 2004 book edited by Miguel.)
Last month Miguel wrote an opinion article for Baptist News Global (see here) entitled “Jesus, The Man of Violence.” In the first paragraph he writes: “. . . intellectual honesty forces me to recognize that Jesus was no pacifist.”
I’m sorry to say, though, that I found Miguel’s arguments for Jesus’ non-pacifism unpersuasive. I agree with his saying that “Jesus was a troublemaker, instigator or conflict, disrupter of unity.” But is that antithetical to his being a pacifist?
A few weeks ago my pastor spoke briefly about this issue in a sermon. She emphasized, that pacifism does not mean, or necessarily embrace, passivism. She used her former church’s basketball team as an example.
PaciFISTS was the name used by the women’s team of Bethel College Mennonite Church. Here is a picture of her jersey: 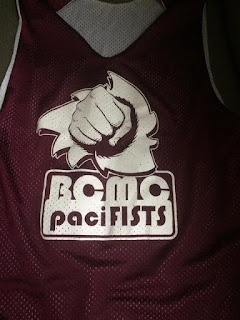 Pacifism does not mean passive resignation to an undesirable status quo. (Somehow, Miguel seems to have overlooked that point.) Pacifists can, and should, stand up and “fight” against opponents—just like Pastor Ruth’s energetic, competitive basketball team, the PaciFISTS, did.
This stance hasn’t always been emphasized in Mennonite churches. But what some call (correctly, I think) Neo-Anabaptism has made an important shift from traditional passive non-resistance to active, non-violent resistance. The latter is the position of paciFISTS.
And that seems to be the stance Jesus took.
Last month the second edition of Kingdom Ethics: Following Jesus in Contemporary Context by David P. Gushee and the late Glen H. Stassen was published. (It is now a whopping 550 pages.) They state, “For the first three hundred years of the Christian movement, the church was almost unanimously pacifist” (p. 317).
Why did Christians take that stance for so long, if they didn’t get it from Jesus?
Miguel says “it would be simplistic to argue that [Jesus] was a pacifist.” But isn’t it historically inaccurate to argue that he wasn’t? Or was his position just misunderstood for the first 300 years?
Miguel also says that “pacifism seldom works in the schoolyard.” Well, it didn’t work for Jesus either. And it didn’t work for the many martyrs in the early decades/centuries of Christianity.
But the blood of the pacifist martyrs became the seed of the church. On the other hand, the violent rebels in the Roman Empire in those years (such as Barabbas and his cohorts) were annihilated.
I fully agree with what Miguel says about the need to oppose and to “disrupt structures that support and maintain oppression.” Thus, arguing for pacifism must never support suppressing legitimate cries for justice by the marginalized and/or the oppressed.
For that reason, I agree with what Miguel says about “the need to joder,” although I don’t know enough Spanish to grasp fully what he means by that. I think it is consistent, though, with what I am saying about Jesus being a paciFIST.
Those of us who identify as pacifists need, like Jesus, to be paciFISTs, seeking to do what Miguel says needs to be done: “upsetting the prevailing social order designed to protect the power and privilege of the few.”