Truth is the First Casualty

“The first casualty when war comes is truth.” Those words are attributed to Hiram Johnson in 1917. He was a U.S. Senator from California (1917-45) and was strongly opposed to the United States entering World War I.
Perhaps it can also be said that truth is the first casualty when there is a political convention. I say this partly because of my reflection upon last week’s Republican National Convention. Unfortunately, the same will probably also be true at the Democratic National Convention this week, although to a lesser degree I hope and pray.
Early in his acceptance speech the Republican nominee declared, “Here at our convention, there will be no lies.” But the next day a Huffington Post article had this headline: “Donald Trump Promises Not To Lie, Right Before Lying A Bunch Of Times.”
Was Trump really lying in his acceptance speech? Perhaps, but that depends partly on what one means by lying. If a lie is something one deliberately says in spite of knowing that it is false and with the intent of misleading other people, then Trump probably did lie about a number of things.
But he may well have thought that what he said was true, for he most likely didn’t look up all the facts and figures used in his speech. The fact-checkers did look them up, though, and many statements were found to be incorrect, misleading, and/or just plain false.
Truth, or the lack thereof, has been an issue with Donald Trump for a long time, as the fact-checkers have abundantly shown. The following chart indicates his and 19 other politicians’ untruthfulness/truthfulness. 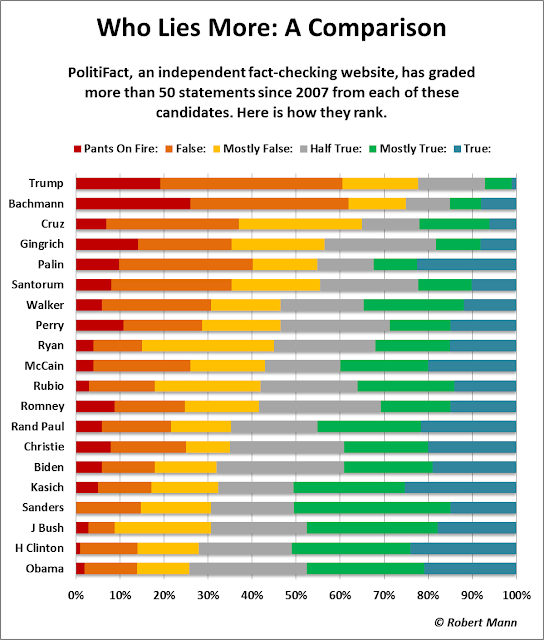 This chart was uploaded on imgur.com (see here) on June 7, but I have not been able to authenticate the accuracy of these figures. Neither have I been able to discover who Robert Mann is. (He may be, or perhaps is not, a journalism professor at LSU.)
It must also be noted that all falsehoods are not of the same seriousness, and this chart deals with only the quantity of the lies told, not with qualitative differences. Still . . . .
If you want to consider only the two presidential candidates, here are figures from a July 1 article in the Washington Post: 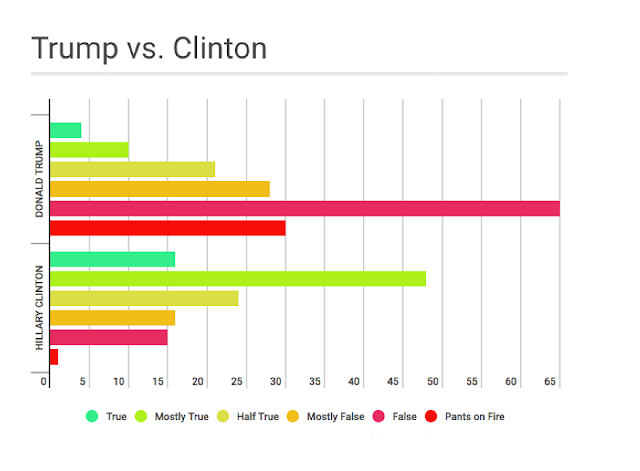 Writing last Friday about the RNC, Jim Wallis averred that “the continual outright lies and vicious personal attacks this week have been extraordinary.”
One of those lies was told by Ted Cruz on July 20: “Our party was founded to defeat slavery. Abraham Lincoln, the first Republican president, signed the Emancipation Proclamation. We passed the Civil Rights Act, and fought to eliminate Jim Crow laws. Those were fights for freedom, and so is this,” he said.
This false claim that the Republican Party (as well as the Democratic Party) of today is the same as it was in Lincoln’s day is widespread. For example, on his July 22 radio show Rush Limbaugh declared, “The Democratic Party was the Party of the KKK—and it still is!”
(For an excellent explanation of the reversal of the two parties through the years, check out the article linked to here.)
Rush also highly recommended “Hillary’s America,” the new movie by Dinesh D’Souza that opened on July 22. D’Souza spoke at the Faith and Freedom Coalition meeting I attended in June, so I was not surprised to receive a FFC email last week with this headline: “D’Souza reveals the sordid truth about Hillary & the secret history of the Democratic Party.”
But the “sordid truth” that D’Souza reveals is full of lies. Once again truth is a casualty.
Posted by LKSeat at 5:29 AM