The 14th Amendment, the “Second Constitution”

To state the obvious, race relations in the U.S. are not good at the present time. The shootings of two black men by police officers and the “revenge shootings” this month of on-duty police officers in Dallas and Baton Rogue are indicative of the racial tensions within the country.
As bad as things are, however, they are not nearly as bad as they were 150 years ago, in 1866. And largely because of what Congress did in June of that year, things are much better now than they were then—in spite of lingering problems.
My July 5, 2013, blog article was titled “Celebrating the Ninth of July” (see here), and it was largely about the ratification of the 14th amendment to the U.S. Constitution on that date in 1868. But I know a lot more about that amendment now than I did then.
I know more now largely because of reading the detailed book by Garrett Epps, Democracy Reborn: The Fourteenth Amendment and the Fight for Equal Rights in Post-Civil War America (2006).
Epps’s highly regarded book describes the torturous path toward drafting the 14th amendment and getting it passed in June 1866. The Senate passed the new amendment by a vote of 33 to 11 on June 8 and five days later the House of Representatives passed it with a vote of 120 to 32.
Regarding the latter vote, Epps points out that no Democratic voted for it and no Republican voted against it (p. 239). (As I keep pointing out, today the positions of the two parties are completely reversed.)
The new amendment granted citizenship to “all persons born or naturalized in the United States,” which included former slaves recently freed by the 13th amendment. In addition, it forbids states from denying any person “life, liberty or property, without due process of law” or to “deny to any person within its jurisdiction the equal protection of the laws.”
Connecticut promptly ratified the proposed amendment on June 30, followed by New Hampshire on July 6. Somewhat surprisingly, Tennessee, one of the states that seceded, was the third state to ratify the new amendment—and it was the only southern state to ratify it until forced to do so.
Since the other former Confederate states refused to ratify the amendment, Congress passed the Reconstruction Act, which imposed military government on those states until new civil governments were established and which also declared that each former Confederate state must ratify the 14th amendment before “said State shall be declared entitled to representation in Congress.”
So, finally, the 14th amendment to the Constitution was ratified on July 9, 1868, and that was of great significance—although much of it was not implemented fully for nearly 100 years. 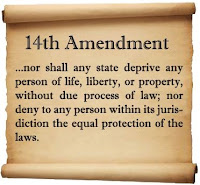 Even though a part of the deliberations about the 14th amendment, voting rights for black men were not granted until the ratification of the 15th amendment in 1870. And although discussed in connection with both the 14th and 15th amendments, voting rights for women of any color were not granted until 1920!
Still, in the words of Wake Forest University law professor James E. Bond, “The fourteenth amendment is a second American Constitution, the ‘new birth of freedom’ for which Lincoln had prayed at Gettysburg” (see here).
It was not, however, until the Brown v. Board of Education decision of the SCOTUS in 1954, the Civil Rights Act of 1964, and the Voting Rights Act of 1965 that provisions of the 14th amendment were implemented for many African-American citizens.


And, sadly, now more than 50 years later racial discrepancies still persist.
Posted by LKSeat at 5:29 AM