It was 100 years ago that Seinan Gakuin was founded as a small school for junior high boys in Fukuoka City, Japan. June and I have just arrived in Japan to see old friends and to participate in the centennial activities of Seinan Gakuin. I will share ightmore about those events next month.


It was also 100 years ago, on April 25, 1916, that a baby was born in New York City and given the name Rousas John Rushdoony. His parents were recently arrived Armenian immigrants, having fled the Armenian Genocide of 1915. His ancestors had lived for generations in a remote area near Mount Ararat.
R.J. Rushdoony followed his father and many of his ancestors into the ministry. He was ordained by the Presbyterian Church USA in 1944 and later transitioned to the more conservative Orthodox Presbyterian denomination.
In the early 1950s, Rushdoony became a reader of, and then a contributor to, the Christian libertarian magazine Faith and Freedom, which advocated an “anti-tax, non-interventionist, anti-statist economic model” in opposition to FDR’s New Deal.
Rushdoony moved to Los Angeles in 1965 and founded the Chalcedon Foundation. The monthly Chalcedon Report, which Rushdoony edited, began appearing in October of that year. In the early 1970s his daughter Sharon married Gary North (b. 1942), an economic historian. Rushdoony and his son-in-law worked together, and later separately, on what is known as Christian Reconstructionism. 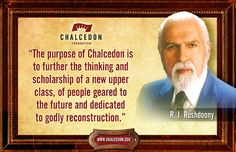 Rushdoony’s major work, and the foundational book for Reconstructionism, is his 890-page book The Institutes of Biblical Law (1973). His key ideas of theocracy (“government of a state by immediate divine guidance or by officials who are regarded as divinely guided,” according to Merriam-Webster) and theonomy (rule by God’s law) are found in that book.
Rushdoony’s ideas are also known as Dominionism, the belief that Christians following God’s law should have dominion over civil affairs. As Rationalwiki.org puts it “Dominionists are, for all intents and purposes, the literal Christian equivalent of Islamists demanding Sharia law.”
“Dominion Theology” is succinctly explained in Sara Diamond’s authoritative book Roads to Dominion: Right-Wing Movements and Political Power in the United States (1995). (See especially pages 246-9.)
A recent and also notable book on the subject is Michael J. McVicar’s Christian Reconstruction: R.J. Rushdoony and American Religious Conservatism (2015). In it also there is a brief section titled “Dominion Theology” (pp. 197-201).
As noted in these two books, Rushdoony’s greatest influence was in the late 1970s and 1980s. I briefly wrote about him and his influence in my book Fed Up with Fundamentalism (see pp. 48-51). That influence was seen in his contact with Pat Robertson (and his appearances on Robertson’s “700 Club”), with Jerry Falwell, and with Francis Schaeffer, who, to his credit, later repudiated the Reconstructionist movement.
While his influence may not be as great now as it was 30 years ago, neither is it negligible. Among current right-wing politicians, perhaps Sen. Ted Cruz has, partly through his father, been most influenced by Rushdoony’s view of Christianity.
In Christian Nation, the dystopian novel that I wrote about on Feb. 14 (see here), Rushdoony is mentioned repeatedly.
So, because of his historical significance as a “mover and shaker” of the Christian Right, R.J. Rushdoony is someone who needs to be remembered on this 100th anniversary of his birth. But I remember him reluctantly because of the justifiably negative reactions toward the kind of Christianity he espoused and for his failure to have a more enlightened view of God, the Bible, and the responsibility of Christians in the world.
Posted by LKSeat at 6:24 AM