Do You Have to Pay Income Tax?

Well, it is that time of the year again—income tax time in the U.S. Actually, tax day is not today, as I thought when I planned this article, but on April 18 this year.
Of course, most of you who were expecting to get a tax refund probably filed your return weeks ago. But perhaps others of you who, like me, have to pay more when filing have waited until near the deadline.
To ask some people, “Do you have to pay income tax?” might be a way of subtly inquiring about their income. Those below a certain level of income don’t have to pay any income tax—and last year it was reported that just over 45% of U.S. adults paid no federal income tax.
Back in 2012, that figure was given as 47%, and they were people that Mitt Romney and Paul Ryan dubbed as “takers.” (To his credit, last month Ryan admitted that he was wrong in what he said back then.) It remains true, though, that some people don’t have to pay income tax because of their limited income.
There are some, however, who contend that U.S. citizens don’t have to pay income tax because the government doesn’t have the right to demand such taxes. Actually, I have been planning to write this article ever since I saw that Irwin Schiff died last October.
I had never heard of Schiff (b. 1928) before, but he was a prominent figure in the U.S. tax protester movement and died in federal prison while serving a sentence of at least 13 years for tax evasion.
Schiff was the author of several books, including Federal Mafia: How It Illegally Imposes and Unlawfully Collects Income Taxes (3rd rev. ed., 1999). It is the only non-fiction book banned by the U.S. government—because it was judged to contain fraudulent information.
Whether by protest, by negligence, or by poor financial management, there seem to be many people who haven’t paid all their income tax and, consequently, who own the government a lot of money. There is now even a federal program, the “Fresh Start Initiative,” to assist taxpayers who owe back taxes. 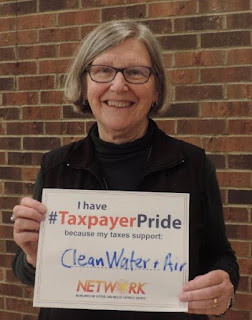 In addition, I have been amazed at how many advertisements I have heard/seen recently by companies who are seeking clients whom they can help, for a sizeable fee no doubt, settle with the government for less than they owe in back taxes. So, evidently, some people don’t have to pay all their taxes because of getting behind in their payments.
In stark contrast to tax protesters such as Irvin Schiff are those who advocate taxpayer pride. Sister Simone Campbell is one such person. (Some of you will remember her as “the nun on the bus.”) She is the head of a group known as NETWORK: A National Catholic Social Justice Lobby.
I receive her/their emails regularly, and their April 1 email was titled, “Join Us in Showing #TaxpayerPride April 15! Take a Picture with What You are Proud to Pay For.” Here is the picture Sister Simone posted:
Sister Simone says, “There are many great things that taxes pay for, and we at NETWORK are ready to show our #TaxpayerPride. We know that when we all come together and pay our fair share, our communities are healthier, happier, safer, and stronger.”

Surely it takes the sting out of paying our income tax when we realize that, among other things, those funds to go, at least in part, to make better communities for us all.