The Woman Who Worked for God and FDR

In February 1933, Franklin Delano Roosevelt, the newly elected President, came to see a woman about becoming the labor secretary in his Cabinet. There had never before been a woman Cabinet member. This woman, though, would not agree to take the job if FDR did not agree to support her goals.
She faced FDR squarely and ticked off the items on her list: a forty-hour workweek, a minimum wage, worker’s compensation, unemployment compensation, a federal law banning child labor, direct federal aid for unemployment relief, Social Security, a revitalized public employment service, and health insurance. Quite a list!
The woman in question was Frances Perkins, and she did become FDR’s Secretary of Labor, serving in that position for Roosevelt’s entire 12 years in office. 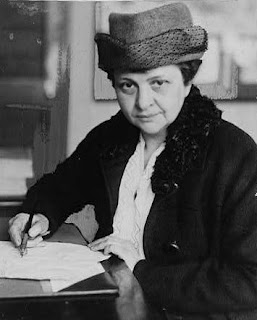 The story of her meeting FDR and presenting her conditions for accepting his invitation to join his Cabinet is told in the prologue of Kirstin Downey’s definitive biography of Perkins, The Woman Behind the New Deal: The Life of Frances Perkins, FDR’s Secretary of Labor and His Moral Conscience (2009).

Frances Perkins was born on April 10, 1880, and when she stepped down from office in 1945—twenty years before her death in May 1965—she remarked to Supreme Court Justice Felix Frankfurter, “I came to work for God, FDR and the millions of forgotten, plain, common working men” (Downey, p. 398).
Born in Boston, Frances graduated from Mount Holyoke College, where she was president of the graduating class of 1902. She led her class to choose “Be ye steadfast” for their class motto, words taken from 1 Corinthians 15:58, which ends, “ye know that your labor is not in vain in the Lord” (KJV).
A couple of years after graduating, Frances moved to Chicago where she had considerable contact with Jane Addams and Hull House—and also considerable contact with poor and needy people. According to Downey, when friends once questioned her as to why it was important for people to help the poor, “Frances responded that it was what Jesus would want them to do” (p. 18).
In 1909 Frances moved to New York City, and on the afternoon of March 25, 1911, she was having tea with friends near Washington Square Park in Manhattan when they heard fire sirens. She was one of many who rushed to gaze in horror at the fire that had broken out at the Triangle Shirtwaist Factory.
The second chapter of David Brooks’s book The Road to Character (2015) begins by relating Frances’s experience on that fateful afternoon. Brooks remarks, “After the fire, what had been a career turned into a vocation. Moral indignation set her on a different course. . . . She became impatient with the way genteel progressives went about serving the poor.”
Perkins’s way to serve the poor turned out to be as Secretary of Labor. By being the woman behind the New Deal and the “conscience” of FDR, her contributions to helping the poor were numerous and praiseworthy.
She instigated Social Security, which many of us benefit from now. She also established the nation’s first minimum wage law and the first overtime law, from which many of us have also benefited. And those are just some of her many meritorious accomplishments.
At her funeral, the minister read the Bible verse Perkins recommended to her college graduating class 63 years earlier. Indeed, she had been admirably steadfast in working for God and for FDR—and she did that by laboring tirelessly for “the millions of forgotten, plain, common working men” and women of the country.
Posted by LKSeat at 5:30 AM