At the Vital Conversations meeting that I mentioned in my previous blog article, one of the participants asked if anyone had read the novel Christian Nation. No one had—but I have now been reading it for the last several days. It is an intriguing book.


That 2013 novel by Frederic C. Rich is based on the author’s speculation of what might have happened if McCain and Palin had been elected in 2008. You will likely see me refer to Rich’s novel again in future blog articles.


As I began to read the absorbing book, though, it dawned on me that it was doing the same sort of thing that books and movies have done with regard to Islam. That is, it exacerbates fear and enmity toward people whom the author clearly dislikes and distrusts.


So, author Rich may be guilty of encouraging what might be called “evangeliphobia.” When I thought of that term, I thought that I was perhaps coining a new word. But, alas, there is nothing new under the sun.


I found use of that term as far back as 1998. And in a 2005 article posted online by The Evangelical Fellowship of Canada, “Who’s Afraid of Evangelicals?” refers to “the recent rash of ‘evangeliphobia’.”


In his book The Fear of Islam, Todd Green explains that Islamophobia is closely linked to essentialism, which is the idea that characteristics of some individuals in a group apply to all the people in the same group.


Isn’t that sort of thing happening to evangelicals (as well as Muslims) in this country (and elsewhere)? In some circles aren’t all evangelicals being looked down upon because of the outrageous statements and questionable activities of some evangelicals?


And, of course, the word “evangelicals” could be used in place of conservatives in the previous sentence. Often, however, all evangelicals/conservatives/fundamentalists get lumped together as if they are all the same. That clearly seems to be the case in the novel Christian Nation.


And that is the reason for using the word “evangeliphobia.”


One of the ways to combat Islamophobia is by pointing out that there is much diversity among Muslims. All should not be judged and condemned because of the outrageous behavior of a few. That is a point insisted on by moderate/liberal Christians—such as those who gathered for the discussion of Green’s book at Central Seminary on Monday evening.


But some of these same Christians—and I don’t mean to be critical of my friends at Central—are guilty of this same sort of problematic thinking when it comes to evangelical/conservative Christians. 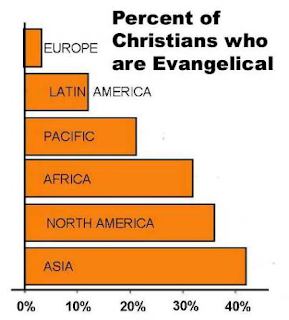 In the spirit of full disclosure, I have to tell you that I (still) consider myself an evangelical—but one who is on the far left of the evangelical spectrum, one who is a Jim Wallis or a Tony Campolo or even a Jimmy Carter type of evangelical.


However, I have many friends (and family members) who are evangelicals and far to my right theologically and politically/socially. But they are not political extremists and don’t deserve to be lumped in with the evangelicals who are exposed/condemned in Christian Nation.


Let’s beware of the unfairness of evangeliphobia we well as of Islamophobia.


RECOGNIZING THE DIVERSITY AMONG EVANGELICALS
For a recent article that clarifies the diversity among evangelicals, see “7 types of evangelicals — and how they’ll affect 2016.”