A Second Bill of Rights

Last week I posted a blog article about President Roosevelt’s famous “four freedoms” speech, which was his State of the Union address delivered 75 years ago.


Three years later, on January 11, 1944, FDR gave his 11th (!) State of the Union talk. He had just recently come back from an overseas trip during which he had conferred with British Prime Minister Churchill in Cairo and then had attended the “Big Three” summit with Stalin in Tehran.


In addition to being exhausted, he had also caught influenza from which he was still recovering. So the President chose to send his 1/11/44 “State of the Union” message to Congress in writing and to read the message to the American people from the comfort of the White House. 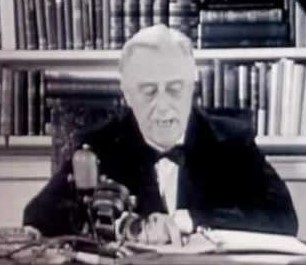 That talk was another of FDR’s “fireside chats” to the whole nation. It was a highly significant talk, for in it he set forth what he called a second Bill of Rights. (Hear part of it here.)


The Second World War would not be over for another 19 months, but FDR was looking past the end of the war, which he confidently thought the Allies would win.


In that momentous “chat,” he asserted that a “basic essential to peace—permanent peace—is a decent standard of living for all individual men and women and children in all nations. Freedom from fear is eternally linked with freedom from want.”


The President clearly was reinforcing two of the freedoms he had emphasized in his State of the Union message three years before.


He went on to aver that “true individual freedom cannot exist without economic security and independence. . . . People who are hungry, people who are out of a job are the stuff of which dictatorships are made.”


So President Roosevelt proposed “a second Bill of Rights under which a new basis of security and prosperity can be established for all.” He explained that those rights include . . .


** The right to a useful and remunerative job in the industries, or shops or farms or mines of the nation;


** The right to earn enough to provide adequate food and clothing and recreation;


** The right of farmers to raise and sell their products at a return which will give them and their families a decent living;


** The right of every business man, large and small, to trade in an atmosphere of freedom from unfair competition and domination by monopolies at home or abroad;


** The right of every family to a decent home;


** The right to adequate medical care and the opportunity to achieve and enjoy good health;


** The right to adequate protection from the economic fears of old age, and sickness, and accident and unemployment;


** And finally, the right to a good education.


Immediately following this listing, the President went on to assert, “All of these rights spell security. And after this war is won we must be prepared to move forward, in the implementation of these rights, to new goals of human happiness and well-being.”


There was some progress in the U.S. toward realizing these goals in the first 20 years following the end of the war.


But in the 1960s it began to be increasingly realized that some, especially African-Americans, were not being treated fairly and their economic rights were not being realized sufficiently.


The struggle goes on as even today, for example, many of our political leaders oppose increasing the minimum wage and have voted to repeal “Obamacare” without proposing any way to provide adequate medical care to many “fellow citizens.”
Posted by LKSeat at 5:29 AM