What about Those Who Are Trans Formed?

Things used to be so simple when it came to gender issues. Boys/men were males who liked girls/women and girls/women were females who liked boys/men or at least wanted a good one for a husband and breadwinner/caretaker.
In all the “advanced” civilizations of the world that was how things were—in public and on the surface, at least. Those who did not fit the prescribed roles had to keep their real feelings in a “closet.” Those who deviated from the traditional pattern were thought to be, and castigated as, deviants—and often called even more derogatory names.
In several previous blog articles I have written about LGBT issues, focusing mostly on the LGs (lesbians and gays). I am still at a loss to know what to say about the Bs (bisexuals). But now the Ts are being widely discussed. The Ts, of course, refers to transgender persons, now often just calls trans.
A trans man is a female-to-male transgender person who was identified as a female at birth but whose gender identity is that of a man. And a trans woman is, of course, the opposite—and perhaps the best known trans woman in the world this week is Caitlyn Jenner.
The cover story of the June 1 issue of Vanity Fair magazine was “Call Me Caitlyn,” the tale of Olympic gold-medal (decathlon) champion Bruce Jenner’s transformation from the Male Athlete of the Year in 1976 to a female who looks like a model in 2015. 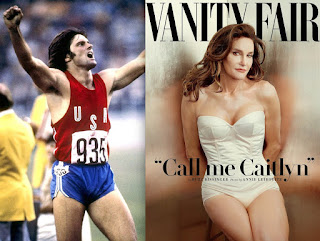 Jenner says that she was trans formed (my words); that is, born as a female in a male body. Therefore, at the age of 65 she was, finally, transformed from a man to a woman. After her transition, Jenner tweeted on June 1, "I'm so happy after such a long struggle to be living my true self.”
But there are those, especially some conservative Christians, who do not approve of what Jenner did and do not believe in trans formation or affirm those who are transformed from one gender to the other. One such person is Ronnie Floyd, pastor of a megachurch in northwest Arkansas—and currently the president of the Southern Baptist Convention.
Among other things that might be said about him, Floyd is the pastor of the Duggar family, about whom many of you know much more than I. Like most of you, though, I have heard that Josh Duggar, the oldest of the “19 Kids,” has admitted to molesting girls when he was a teenager.
Even before the release of the new issue of Vanity Fair, Floyd made reference to the sins of both Duggar and Jenner, saying they were both sinners: the former because of sexual molestation and the latter because of gender transition.
According to the Christian Post, Floyd stated that “gender is not fluid” and he emphasized that God does not make mistakes. He is also quoted as saying, “Did God make him this way? Absolutely not.” In Floyd’s view, no one is trans formed—and it is wrong (sinful) to transition from one gender to another.
But more and more conservative Christians are admitting that most gays and lesbians are such by birth and not by choice, and that their sexual orientation is due to “nature” not “nurture.” Thus, reparative therapy is largely discounted now.
So why should it be any different for those who are trans? And if they were trans formed, shouldn’t they be supported and affirmed if or when they transition into a trans man or a trans woman?
Blessings on you, Caitlyn Jenner!
Posted by LKSeat at 5:32 AM