The Plight of the Palestinians

As you know from my recent article, this month I made a week’s visit to the country of Israel. My daughter Karen, who is a professor at the University of Arizona, was going to an academic conference in Tel Aviv, and she invited me to go with her. We both had a wonderful time there.
On June 24 while Karen was attending her conference, I made a trip to Bethlehem. By taxi I observed the current conditions there. Then I visited the Church of the Nativity and walked up and down the streets in the center of that recently walled city.
Since the early 2000s, the Israeli government has been building an extensive network of walls to restrict the movement of Palestinians, essentially imprisoning them within their cities/towns.
Those imposing walls are from 20 to more than 25 feet high. Some of the sections are covered with graffiti, as you see in the picture below. That was part of the wall my Palestinian taxi driver took me by. 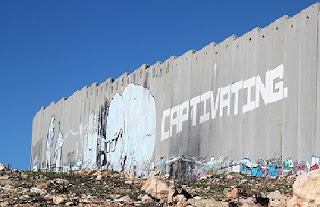 Bethlehem is within what is known as the West Bank, which is Palestinian territory under Israeli control since 1967. Tourists are able to enter and leave the city without much hassle, but Palestinians (which make up almost the entire population of the city) are greatly restricted and cannot leave without permits, which are difficult for most people to get.


Seeing the people of Bethlehem virtually imprisoned in their own city was my initial introduction to the plight of the Palestinians.
Whereas Tel Aviv is a modern city with upscale department stores and restaurants, teeming with affluent people enjoying eating and drinking at sidewalk cafes as well as swimming and engaging in other fun activities on the beach of the Mediterranean Sea, Bethlehem is much more like a “third world” city.
Almost all the people in Bethlehem are Muslims but my taxi driver said he is a Christian. Like most of the Palestinians who live there, though, he bemoaned the lack of freedom and the restriction of basic human rights.
The next day, I was able to join Karen’s group for an all-day study tour of Jerusalem—and by all-day I mean we left a little after 8:30 a.m. and didn’t get back to the hotel until well after 10 p.m. Although quite tiring, it was a superb time of seeing significant sites and of learning about the history and current situation of Jerusalem, the most fascinating city I have ever visited.
Part of the tour was conducted by an NGO Ir Amim guide, who showed us how Israel is steadily building “settlements” in East Jerusalem, territory originally designated for Palestinians.
According to the Israel Central Bureau of Statistics, by 2013 there were nearly 360,000 Israelis living in such settlements. There are far more than that now. And by settlements, I am talking about fine residential communities built to last permanently.
While these Israeli settlements are illegal according to international law, Israeli citizens continue to move freely to and from those settlements. Palestinians, though, remain trapped by the “separation walls” that have been built on their own lands.
The human rights of Palestinians have been grossly trampled on since the formation of modern Israel in 1948 and then by the nation of Israel, especially since 1967. It is high time for peace and justice advocates to stand with the Palestinian people in opposition to their demeaning and unjust treatment.
Supporting the BDS (Boycott, Divestment, Sanctions) Movement for freedom, justice, and equality is one concrete action we might take. You can learn more about that Movement here.