The Culture of Poverty

The term "culture of poverty" was introduced by Oscar Lewis in his seminal 1959 book Five Families: Mexican Case Studies in the Culture of Poverty. (If you don’t know about Lewis, 1914-1970, as I didn’t until very recently, he was the son of a Jewish rabbi, the husband of Abraham Maslow’s sister, and a noted anthropologist and university professor.)
Michael Harrington used that same term in "Our Fifty Million Poor," a piece he wrote for the July 1959 issue of Commentary, the monthly magazine founded by the American Jewish Committee in 1945. (Some of you will recall that I mentioned Harrington in my previous, as well as my March 5, blog article.)
In his article, Harrington argued that American poverty constituted “a separate culture, another nation, with its own way of life.” Consequently, he argued, a “comprehensive assault on poverty” on the part of the federal government is needed if the problem of poverty is to be solved. 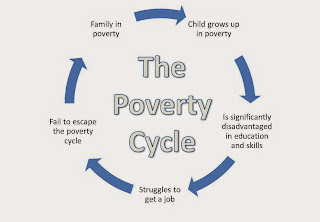 Harrington’s analysis of the problem of poverty in USAmerican society was further developed in his highly-influential book “The Other America” (1962), which is credited with being one of the main works that stimulated President Johnson to declare the war on poverty in 1964.
The Food Stamp Act and the Economic Opportunity Act, both enacted that year, were major parts of the “assault” on national poverty. But that attack weakened during the presidency of Richard Nixon and declined even further after the election of President Reagan in 1980.
Moreover, according to Maurice Isserman, “neo-conservatives took [Harrington’s] notion of the ‘culture of poverty’ and, turning it on its head, used it as an argument against pursuing a federal war on poverty” (“The Other American,” p. 305).
In the early 1970s Harvard University professors such as Edward Banfield (1916-99) and Nathan Glazer (b. 1923) wrote disparagingly of those who were a part of the culture of poverty and of government programs designed to help such people. These ideas affirmed by the neo-conservatives were endorsed by Nixon and have largely been the position of the Republican Party ever since.
Quoting Isserman again,

The trouble with the poor, as the neo-conservatives saw it, was that they had adjusted to a condition of permanent dependency. . . . Those who professed to be interested in aiding the poor by means of expanding the welfare state were, in effect, the poor’s worst enemies . . . (p. 306).

In her book “My Invented Country,” which I recently read, Chilean author Isabel Allende tells about visiting the squatters’ settlements around Santiago when as a young woman she had a job as a journalist.
Allende comments, “That’s when I discovered that social climbing was a middle-class phenomenon, the poor never gave it a thought, they were too busy trying to survive” (p. 127).
To the conservatives of the past and maybe even more in the present--and especially to the strident voices I hear on “talk radio”—the victims of poverty are to blame for their own plight. They could do better if they tried.
But maybe they are just trying to survive.
There has been much talk about the culture war(s) in American society, but little regard for the “war” against those who live in a culture of poverty—although in 1995 Herbert Gans wrote a significant book titled “The War Against the Poor.” (The first chapter is here.)

Surely we need to be understanding of and sympathetic with those living in a culture of poverty--seeing them as neighbors who need to be loved rather than slackers, or enemies, who should be condemned.
Posted by LKSeat at 5:47 AM