Taxation: Theft, or Support of the Public Welfare?

It has been ten days now since Tax Day 2015, but I am still thinking about taxation because of what I saw/heard in the media in the days following April 15.
While driving around town on the 17th, I listened to some of the Chris Plante Show. Since February, that program has been broadcast from 9 a.m. to noon weekdays on one of the two Kansas City talk radio stations.
Plante’s home base is WMAL in Washington, D.C., and his programs are available on their website. WMAL touts their station as the place “where Washington comes to talk.”
I had heard bits and pieces of Plante’s program before, but I didn’t really catch his name until last week. And I was very negatively impressed with what I heard.
One repeated emphasis of Plante that day was on taxation being “theft.” That’s nothing new for talk radio, it seems, for I remember first hearing that opinion expressed by Mike Huckabee a couple of years ago.
Plante likened taxation to the way the Nazis stole the wealth of Austrians in the new movie “Woman in Gold.” And he decried the way the Democrats want to “steal” wealth of people when they die rather than allowing their descendants to inherit it.
The government is there “to steal everything,” Plante warned.
Just the day before, the U.S. House voted to repeal the estate tax. That has long been the goal of Republican legislators—in spite of the fact that currently the first $5,430,000 of any estate is exempt from taxes.
The anti-estate tax rhetoric speaks about descendants having to sell their inherited farms in order to pay the taxes. But in 2013 only 0.6% (1 out of every 167) of the estates of farmers owed any estate tax at all.
And overall, only 1 in every 553 inheritances owed any estate tax. It is true that the President wants to lower the estate tax exemption to a mere (!) $3,500,000 and to increase the taxation rate from 40% to 45%. But, still, that is a far cry from trying “to steal everything.”
On that same program, Plante also criticized the President for not doing enough to fight Islamic terrorists. But months ago it was estimated that the U.S. bombing strikes against ISIS had exceeded $1,000,000,000 and is currently costing at least $10,000,000 a day.
Where is that money coming from, if not from taxes? How can a reasonable person possibly vilify taxation as theft and then criticize the administration for insufficient military activity?
In great contrast, during the week of April 15, Sister Simone Campbell, the “nun on the bus” (about whom I wrote here), was promoting a Facebook/Twitter movement dubbed #TaxPayerPride.

According to a HuffPost article, her desire is to remind people of the good work their tax money can accomplish.

Sister Simone says too many politicians focus on cutting taxes "at the expense of the good of our nation." Instead, she wants to celebrate how taxes make America a "stronger, more humane country"—by helping to support health care, education, food and transportation. 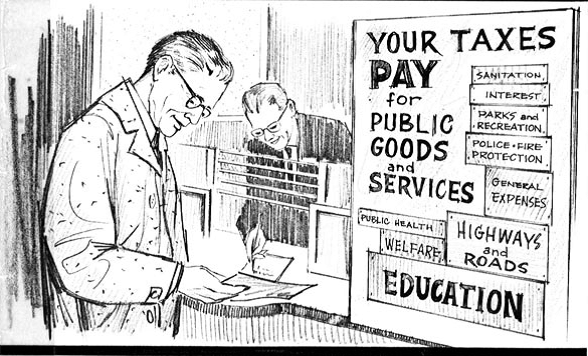 As you might guess, I am in considerable agreement with Sister Simone and in complete disagreement with Chris Plante.
On April 13, June and I paid far more in federal and state income tax than our entire yearly income was back when we were first married. And though I don’t like my taxes being used for warfare  and support the Religious Freedom Peace Tax Fund Act, I am happy to pay taxes for support of the public welfare.
What about you?
Posted by LKSeat at 5:28 AM