The Making of Saint Oscar

It was 35 years ago, on March 24, 1980, that Archbishop Óscar Romero of San Salvador was assassinated, but he has been back in the news this year. After much hesitation, the Catholic Church is now moving toward making him a saint.


Even though masses of the common people of El Salvador had no question about it, Romero’s martyrdom was not officially recognized until Pope Francis did so last month. And then last week it was announced that Romero will be beatified on May 23. So before long there will most likely be a Saint Oscar.
Romero was born in 1917 in rural El Salvador. (I was interested to learn that I was born on his 21st birthday.) He studied for the priesthood in Rome and was ordained there in 1942. After serving as a parish priest back in his home country, he was appointed bishop of a poor, rural diocese in 1974. Then just three years later he became Archbishop of San Salvador.
His appointment as archbishop came as a disappointment to the progressive priests of El Salvador, for at that time Romero was quite conservative and traditional. But things soon began to change.
Less than three weeks after becoming archbishop, Fr. Rutilio Grande, his good friend and a progressive Jesuit priest who was working with the poor, was assassinated. Grande’s death had a profound impact on Romero, who later stated, “When I looked at Rutilio lying there dead I thought, ‘If they have killed him for doing what he did, then I too have to walk the same path.’”
Grande’s assassination triggered what some have called Romero’s “conversion” to liberation theology. As John Dear, the Jesuit peace activist I wrote about previously, said (in an excellent 2010 article in the National Catholic Review), “Romero was transformed into one of the world's great champions for the poor and oppressed.” 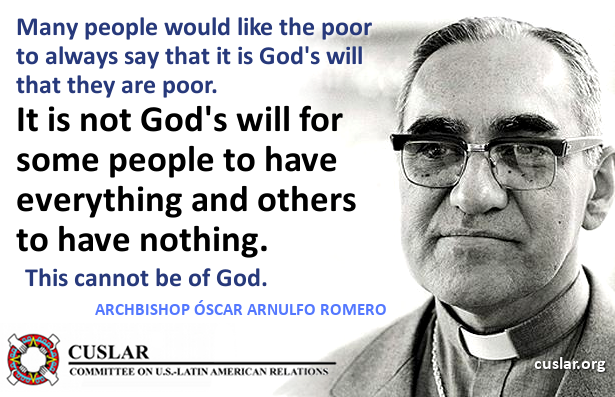 My longstanding admiration increased this month as I watched the documentary “Monsigñor” with a group that gathered at the Guardian Angels Catholic Church in Kansas City and listened to comments by Fr. Michael Gillgannon, who was a missionary in Latin America for over 30 years.
And then June and I watched the 1989 movie “Romero” for the second (or maybe third) time. It is a most engaging movie that I highly recommend. Its portrayal of the last few years of the Archbishop’s life is in harmony with Scott Wright’s excellent biography “Oscar Romero and the Communion of the Saints” (2009).
According to Fr. Dear (I’m very sad to note),

When President Jimmy Carter announced in February 1980 that he was going to increase U.S. military aid to El Salvador by millions of dollars a day, Romero was shocked. He wrote a long public letter to Carter, asking the United States to cancel all military aid. Carter ignored Romero’s plea, and sent the aid. (Between 1980 and 1992, the U.S. spent $6 billion to kill 75,000 poor Salvadorans.)

(Romero’s letter to Pres. Carter can be found here. Dear’s statement may be somewhat inflated; a more objective statement is found in a 1993 article, “US Policy in El Salvador.”)
The very next month, Romero was shot and killed while celebrating Mass. The assassin was part of the death squad formed and directed by Roberto D'Aubuisson, who was trained at the School of the Americas, moved to Fort Benning, Georgia, in 1984.
U.S. policy may not have changed so much since 1980, but the Vatican has changed during the last two years under Pope Francis. So, thankfully, Romero is now in the process of being made Saint Oscar.
Posted by LKSeat at 5:30 AM