In Memory of Marcus Borg

Marcus Borg was born on March 11, 1942—eight days after my little sister. But whereas my sister is alive and well—in celebration of her birthday June and I had a good visit (and a good meal) with her and her husband in St. Joe last week—Borg passed away on January 21 of this year.
Borg’s death was a great loss to the Christian academic world, for he was a good scholar and a prolific writer. He will be especially missed by many non-conservative Christians, for whom he was long a noteworthy spokesman.
The New York Times referred to Borg as “a leading evangelist of what is often called progressive Christianity.” His interpretation of the Christian faith convinced many people to remain a Christian.
That article related how Borg spoke at a packed church in Colorado a few years ago. Then, on the day Borg died, the pastor of that church said he received an email from a young woman in his church. She wrote “Without Marcus, I wouldn’t be able to call myself a Christian.”
Similarly, the author of an article in The Christian Century avers that many Christians “identify Borg as the person who made space for them to return to—or remain in—the Christian faith.” To the extent that that is true, Borg is certainly praiseworthy.
Borg’s contribution to contemporary Christianity was much like that of Henry Emerson Fosdick in the 1920s. In the first chapter of my book “The Limits of Liberalism” (2010) there is a brief section on “the liberalism of Fosdick.” Then in the second chapter, Borg is presented as one of the “contemporary leaders of liberalism.”
Borg, like Fosdick, was able to interpret the Bible and Christian beliefs in ways that appealed to those who were no longer able to accept or to abide in the teachings of fundamentalism or restrictive conservatism.
Borg’s picture is also one of four liberal Christian theologians on the cover of my book. Because I thought some of his theological views were too liberal, in the section about him I said that Borg “writes in such an evenhanded and convincing manner that in some ways he is the most ‘dangerous’ of the contemporary liberals.”
Borg began writing his last book when he turned seventy. He called it “Convictions: How I Learned What Matters Most,” and it was published less than a year ago. It is a fine book and I enjoyed reading it—and I think it is more balanced theologically than his earlier books. 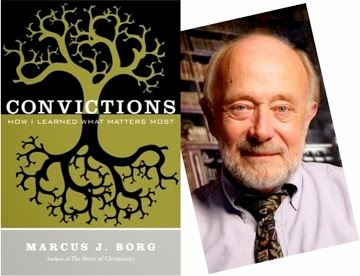 In the introduction of “Convictions,” Borg writes, “Seventy isn’t a guarantee of wisdom or a license to be dogmatic. It’s quite easy to be an opinionated old fool.” It was generous of him to say that—and yours truly needs to remember that also!
If all I had known of Borg was what he wrote in this book, he wouldn’t have been used as an example of contemporary Christian liberalism. And I find that now I am much more in agreement with Borg’s “convictions” than with the theological stance of my own sister.
During the meal at Ryan’s last week, she began asking questions about my theological beliefs. It became quite evident that my views have changed considerably from what we both believed back in the 1950s. But her beliefs seem to be much the same—and she most likely sees that as a positive thing.

But many realize that a broader theological worldview is needed. So they, and I, are grateful for the life and work of Marcus Borg.
Posted by LKSeat at 6:26 AM