Fifty years ago this month, the small city of Selma, Alabama, was much in the news. And now Selma is in the news again, partly because it is the 50th anniversary of what happened in 1965 but also because of the movie “Selma,” nominated for an Academy Award as the best picture of 2014.
The Oscar was not given to “Selma,” but it is a fine movie. June and I usually wait to see movies (with subtitles) when they come out on DVD. But we went to see “Selma” at the local theater—and then I went to the Plaza in Kansas City for a special showing sponsored by a group I plan to write about next month.
At the latter showing, Dr. Tex Sample, a retired professor from St. Paul School of Theology and a relatively new friend of mine, spoke, and responded to questions, about his participation in the last day of the successful march from Selma to Montgomery. It was quite interesting to hear the first-hand report of someone who was there.
As you know, there were three attempts by African-Americans and their supporters to march from Selma to the state capital of Montgomery, approximately 55 miles away.
The first march was on March 7 with 600 people setting out for the capital. They didn’t get far: at the bridge spanning the Alabama River on the south side of the city state troopers wielding whips, nightsticks and tear gas attacked the group and drove them back into town.
That brutal event is known as “Bloody Sunday” (which I wrote about in 2013). John Lewis, a current U.S. Representative from Georgia, was among those severely beaten that day.
(Built in 1940, that bridge was named for Edmund Pettus, 1821-1907, a former Confederate brigadier general, a Grand Dragon of the Alabama Ku Klux Klan, and then a U.S. Senator from Alabama.)
A second march two days later was led by Martin Luther King, Jr., but suddenly he stopped on the same bridge, knelt down in prayer, and then turned around and went back to downtown Selma. Many were critical of King for not pressing on, and it is unclear why he didn’t.
That evening, James Reeb, a white minister from Boston who had come to join the Selma march, was called a “white ni**er” and severely beaten. He died two days later. 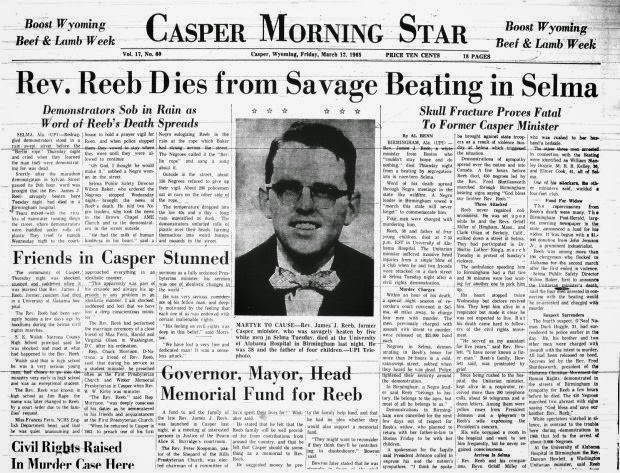 My friend Tex, who lived in Boston at the time, knew Reeb personally and was shocked by his brutal killing. So he, along with many others from across the country, went to join the third Selma march, which started on March 21. There were about 3,200 who set out that day. By the time they reached the capitol four days later, that number had swelled to about 25,000.
In between the second and third marches, President Johnson made a nationally televised speech on March 15. Consequently, the federal government provided military troops to protect those who went on that third march.
The movie “Selma” has been criticized by some for its portrayal of President Johnson. Since it was a Hollywood movie and not a documentary, it is quite likely that some of what Johnson supposedly said and did was not historically accurate. In the end, though, he is shown very favorably in that March 15 address—and listening to his scintillating speech brought tears to my eyes.
Two days later President Johnson sent a bill to congress and in August he signed it, the Voting Rights Act, into law—and the dream of the Selma marchers thereby became reality.
Posted by LKSeat at 5:30 AM