As I wrote about in my previous blog article, Nelson Mandela was elected president of South Africa on April 27, 1994. He was the first black president in that country that had long been dominated by the white minority.
At the time of Mandela’s election, there was still considerable anger and resentment among the blacks because of the decades of abuse and mistreatment under the cruel system known as apartheid.
There was also considerable fear and anxiety among the whites, who were no longer in control of political power. They had every reason to fear violent reaction by those who for so long had been victims of injustice. And there was unrest that did result in some violence.
However, President Mandela took a conciliatory attitude and led in the formation of the Truth and Reconciliation Commission (TRC) in 1995. Mandela chose Desmond Tutu to be the head of the TRC, and he was an excellent choice.
Tutu (b. 1931) was ordained as an Anglican priest in 1960. He served three years as the Bishop of Lesotho in the late 1970s and then as Bishop of Johannesburg in 1985-86. Tutu was then installed as the Archbishop of Cape Town (one of the three capitals of South Africa) in 1986, a post he held until 1996, the year he turned 65.
Tutu’s work for peace, justice, and reconciliation began long before 1995. In fact, he was awarded the Nobel Peace Prize in 1984, while Mandela was still in prison and the majority population of South Africa was still under oppressive white rule.
But in his tireless opposition to apartheid, Tutu advocated only nonviolent means for change.
Tutu’s new book “The Book of Forgiving: The Fourfold Path for Healing Ourselves and Our World” was published just last month. It was co-authored with his daughter Mpho. She is also an Anglican priest who now lives in Virginia.
Having just read their splendid book, I highly recommend it—especially if you have any lingering feelings of anger or resentment toward people who have hurt you in the past. 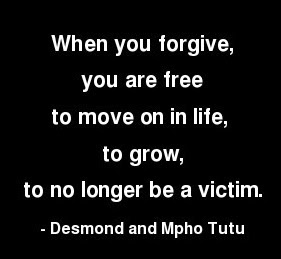 The Tutus’ “fourfold path” to forgiveness includes (1) telling the story, (2) naming the hurt, (3) granting forgiveness, and (4) renewing or releasing the relationship.
I am not sure what all it is going to involve, but beginning on May 4, the Tutus are leading the “Tutu Global Forgiveness Challenge” on the Internet. I have signed up—along with people from more than 120 other countries—to receive the daily emails and other information about forgiveness.
If you are interested, the address for learning more about the Forgiveness Challenge, as well as for signing up, is https://ForgivenessChallenge.com. And while you will probably be encouraged to buy their book, that is not required and signing up for the online activity is free of charge.
In promoting the challenge, their website declares, “The Forgiveness Challenge will help you discover how the act of forgiving can bring more love and peace to your life. When enough of us forgive–we can change the world!”
I think that is quite true. That is the reason I am writing about this—and encouraging you to respond to the forgiveness challenge.
Although Desmond and Mpho Tutu are Anglican priests, their book is not explicitly religious. It is based on a deep understanding of human psychology and verified by the experiences they have had, especially his experience with the Truth and Reconciliation Commission.
And it is by no means just about South Africa. It is for all who need to forgive—and to be forgiven by others.