The plight of Ukraine and especially of Crimea has been much in the news this month. That concern was heightened when on March 16 the people of Crimea voted to become a part of Russia and when on March 21 Russian President Putin signed the bill of accession, making Crimea a part of Russia (again).
There are legitimate concerns about the Crimean vote to secede. Were the people really free to vote as they wished? Or did many vote, and vote as they did, because of the nearby Russian military presence?
And then there is the question of how the minorities in Crimea, the ethnic Ukrainians and the Tatars, will be treated under Russian rather than Ukrainian rule.
This is the main concern, though: is Russia’s accession of Crimea just the first of further attempts of Putin and Russia to acquire additional territory, incorporating more land and people under Russian rule?
Some U.S. politicians have used the secession/accession of Crimea to criticize the President for being “weak”—just as some of the same people accused him of being weak for not taking military action against Iran and/or Syria.
Earlier this month according to CBS News “John McCain blames Obama’s ‘feckless’ foreign policy for Ukraine crisis.” At that same time, Marc A. Thiessen, an opinion writer for the Washington Post penned an article titled “Obama’s Weakness Emboldens Putin.”
In the March 16 referendum, though, an overwhelming majority voted in favor of independence of Crimea from Ukraine and of joining Russia as a federal subject. After the referendum, Crimean lawmakers formally voted both to secede from Ukraine and ask for membership in the Russian Federation.
Since we in this country generally praise democracy, deciding matters by majority vote, why is there such widespread opposition to Crimea becoming a part of Russia again? 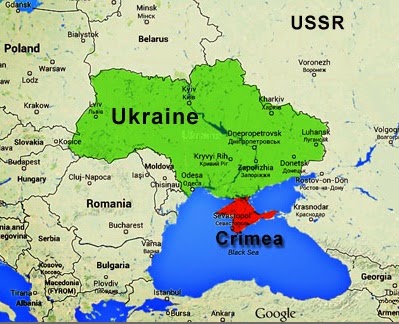 Actually, Russia claims that in 1654 the Council of Pereyaslav approved the unification of Ukraine with Russia. Then in 1783 under the rule of Empress Catherine the Great, Crimea was annexed by the Russian Empire.


It was on the 300th anniversary of the 1654 event that Nikita Khrushchev, head of the Communist Party of the Soviet Union from 1953 to 1964 (and whose wife was Ukrainian), transferred Crimea to the Ukrainian Soviet Socialist Republic.
Of course, Ukraine was still within the Soviet Union. That changed in 1991, though. With the dissolving of the USSR, Ukraine became an independent state. Since 1992 Crimea has officially been the Autonomous Republic of Crimea within Ukraine.
But when the referendum on the Act of Declaration of Independence was held in Ukraine in December 1991, only 37% of the electorate in Crimea voted for independence from Russia, compared to 76% for all of Ukraine (including Crimea).
After all, a large majority of the people who lived in Crimea then were ethnic Russians who spoke the Russian language. And that is even more so now: according to an article in the March 21 Washington Post, nearly 80% of the Crimeans now are ethnic Russians.
So in spite of all the worry in the West, and all of the criticism of the President in the U.S., perhaps the “loss” of Crimea is not such a serious issue—and being a part of Russian again likely seems to be a good thing to the majority of the people who live there.
Certainly it is a matter of concern that the accession of Crimea may be just the first step in Russia’s (Putin’s) annexing other lands and people. That is not likely to happen, though. At least I certainly pray that it won’t.
Posted by LKSeat at 5:29 AM