Some of you probably have known for quite some time who Dr. Ben Carson is. For some reason, I have just recently heard about him. In an email received recently, a friend told me about the movie “Gifted Hands: The Ben Carson Story.” June and I watched that inspiring film on March 7. 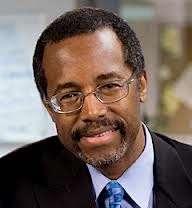 The very next day Carson was a featured speaker at this year’s CPAC (Conservative Political Action Conference). At that meeting there was some hubbub by those seeking to draft him as the Republican presidential candidate in 2016.
Carson (b. 1951) was the second son born to a minister and his young wife (they married when she was 13; he was 28) in Detroit. Young Ben’s parents separated when he was 8, and he and his brother were raised by their remarkable mother. Carson once remarked,


Abraham Lincoln once said, ‘All that I am or ever hope to be, I owe to my mother.’ I’m not sure I want to say it quite like that, but my mother Sonya Carson, was the earliest, strongest, and most impacting force in my life. It would be impossible to tell about my accomplishments without starting with my mother’s influence.

Carson, indeed, went on to accomplish much. He graduated from Yale University and then obtained his M.D. degree from the University of Michigan. After medical school he became a neurosurgery resident at the world-famous Johns Hopkins Hospital in Baltimore.
At age 32, Carson became the hospital's Director of Pediatric Neurosurgery. Then in 1987, he led in the first successful separation of Siamese twins joined at the back of their heads. “Gifted Hands” climaxes with the details of that grueling 22-hour-long operation.
Somehow I missed hearing about Dr. Carson speaking at the National Prayer Breakfast in February 2013. (I have recently listened to it on YouTube.)
It was because of some of the gutsy things Carson said in that 27-minutes talk, with the President sitting just a few feet away, that gained him great acclaim, especially among political conservatives.
Just eight days later Carson was an hour-long guest on the Sean Hannity Show. He has been very popular among conservative Republicans ever since—so much so that a National Draft Ben Carson for President Committee has been formed.
(Their website is RunBenRun.org, and they have already raised more than $3,000,000.)
And on at CPAC on March 8, Carson came in third place (with 9% of the votes) in the poll indicating who the participants most wanted to be President.
Chances are, though, Dr. Carson won’t be the Republican candidate for President in 2016. But should he be?
Carson is obviously very intelligent and has exhibited the ability to overcome great difficulties in order to achieve greatness. He was an outstanding success as a neurosurgeon, his chosen profession. (He retired last summer.)
Further, Carson is certainly a dedicated Christian man with a fine wife and seems to be morally upright in every way. It certainly would be hard to argue with any of those qualifications.
But he has made some very questionable statements in the political arena that make it hard to see him as a viable presidential candidate.
For example, Carson has said ObamaCare is the worst thing for this country since slavery. He has also has made some dumb statements about not raising the debt ceiling. Moreover, he has no experience whatsoever in public office.
So while I have great respect for him as an individual, as a neurosurgeon, and as a person of faith, no, Ben Carson for President doesn’t sound like a good idea.
Posted by LKSeat at 5:28 AM