In Praise of Toyohiko Kagawa

He is no longer well known in the U.S., but there was a time, especially up to the early 1940s, when Toyohiko Kagawa was the best known Japanese in America, except for Emperor Hirohito.
Kagawa was born 125 years ago today, on July 10, 1888. Although sickly from the time he was a young man, he lived until April 1960. During his lifetime of nearly 72 years, he was creatively involved in a wide variety of activities.
He was a Christian evangelist, social reformer, labor activist, author, and peace activist. Because of his contributions in the two latter arenas, he was nominated for the Nobel Prize in Literature in 1947 and 1948 and for the Nobel Peace Prize in 1954, 1955 and 1956.
Kagawa studied at Princeton Theological Seminary from 1914 to 1917 and later made several other trips to the U.S., the most extensive one being for more than six months beginning in December 1935.
In the spring of 1936, he delivered the Rauschenbusch lectures at Colgate-Rochester Divinity School. (Those lectures were named for Walter Rauschenbusch, whom many consider the most prominent Baptist theologian of the 20th century.)
Kagawa’s Rauschenbusch lectures were published later that year under the title “Brotherhood Economics.” Even though (or because?) he was a Christian evangelist, Kagawa was deeply interested in economic matters, especially the plight of the many people in Japan (and the world) who were living in poverty.
He knew about being poor from his own experience.
When he was still a seminary student in 1909, he moved into the largest slum area of Kobe, and lived there for years. He freely shared what he had, including his small house, with needy people.
As a result, he contracted trachoma (a serious and contagious eye disease) from one of the poverty-stricken people he took into his home.
Because of his concern for the poor, Kagawa was active in the founding of the first labor unions in Japan soon after his return in 1917. Over the next several years he worked extensively in forming unions and cooperatives, and that was a major topic in his 1936 lectures.
Kagawa has been called a “reverse missionary.” 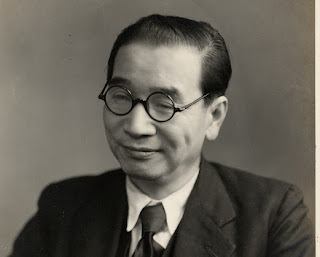 Bo Tao is a doctoral student at Yale University. His masters’ thesis at a university in Shanghai was on Kagawa, and his article in the July 2013 issue of “International Bulletin of Missionary Research” is titled “The Peacemaking Efforts of a Reverse Missionary: Toyohiko Kagawa before Pearl Harbor.”
Tao tells how President Roosevelt personally asked for Kagawa to be allowed to enter the United States, after he had been detained by immigration authorities in San Francisco in 1935. He was held, ostensibly, because of fear that his trachoma might be transmitted to others.
There were some, though, who opposed his involvement in labor unions and cooperatives. They were the same ones who objected to President Roosevelt’s implementation of New Deal policies during the Depression years of the 1930s.
A few years later, after being arrested and detained in Japan for nearly three weeks in 1940 because of his anti-war activities, Kagawa again visited the U.S. from April to August of 1941 in a “last-ditch” effort to avert war in the Pacific.
Unfortunately, as we know, his peace activities were unsuccessful. But not because he didn’t try.
There is much more I would like to write about Kagawa, who as early as 1939 had been deemed one of three “modern saints”—along with Gandhi in India and Schweitzer in Africa.
After all, I included Kagawa on my list of “top ten Christians” in my Sept. 15, 2010, blog posting.
Posted by LKSeat at 5:48 AM