“Hubris” is defined as “excessive pride or self-confidence; arrogance.” It is a word descriptive of the attitude of many individuals as well as many groups, such as corporations or nations. Last month I happened to see (on MSNCB) a television special titled “Hubris: Selling the Iraq War.” It was a most interesting, and quite disturbing, documentary about the events leading up to the war in Iraq, which started ten years ago today, on March 19, 2003. 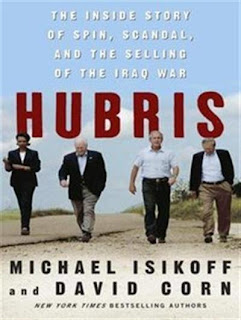 The TV program was largely based on the book Hubris: The Inside Story of Spin, Scandal, and the Selling of the Iraq War (2006) by Michael Isikoff and David Corn, two top-notch American journalists. They were interviewed in last month’s program, which is also available on six YouTube videos.
On the day of its airing, Corn said that “the documentary goes beyond what Isikoff and I covered in Hubris, presenting new scoops and showing that the complete story of the selling of that war has yet to be told.”
In the documentary itself, Isikoff says, “There is no question the news media didn’t do its job during the run-up to the Iraq War. Far too often, the press simply accepted these sweeping assertions by the highest officials in the government, without looking for the hard evidence to support it.”
Before the Introduction in the book, the authors of Hubris begin with this quote: “How is the world ruled and how do wars start? Diplomats tell lies to journalists and then believe what they read.” (These words are from Karl Kraus, 1874-1936, an Austrian journalist and press critic.) That kind of chicanery seems to have lurked behind the starting of America’s first “preemptive” war ten years ago in Iraq.
That war officially ended on December 31, 2011. By that time nearly 4,500 U.S. troops had been killed and more than 32,000 wounded. The war cost U.S. taxpayers more than $3,000,000,000,000. Even worse, an estimated 108,000 Iraqi civilians died as a direct result of the war, and some 15,400,000 were displaced.
Those terrible results all seem to have been largely due to the hubris and erroneous judgment of the top U.S. governmental officials. What a shame for America!
Now in 2013 there are different government executives, but American hubris still seems to be “alive and well.” Last month Bill Moyers and Michael Winship wrote a significant article titled “The Hubris of the Drones.” They charge, “Our blind faith in technology combined with a false sense of infallible righteousness continues unabated.”
The authors also quote Reuters correspondent David Rohde, who recently asserted that the U.S. “administration’s covert drone program is on the wrong side of history. With each strike, Washington presents itself as an opponent of the rule of law, not a supporter. Not surprisingly, a foreign power killing people with no public discussion, or review of who died and why, promotes anger among Pakistanis, Yemenis and many others.”
And then an unnamed former senior military official is quoted: “Drone strikes are just a signal of arrogance that will boomerang against America.”
Near the end of their article, Moyers and Winship aver that American “hubris brought us to grief in Vietnam and Iraq and may do so again” with the current President’s “cold-blooded use of drones and his indifference to so-called ‘collateral damage,’ grossly referred to by some in the military as ‘bug splat,’ and otherwise known as innocent bystanders.”
Does not this nation badly need to repent of its hubris in initiating and conducting the war on Iraq and to rethink the way drones are now being used?
Posted by LKSeat at 5:28 AM