“Habemas Papam!” Those words resounded throughout the Vatican on Wednesday evening after the throngs gathered outside St. Peter’s Basilica observed white smoke emanating from the chimney connected to an old stove temporarily installed again in the Sistine Chapel. 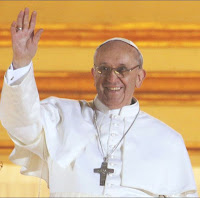 As you know, Cardinal Jorge Mario Bergoglio of Argentina was elected as the new pope on the fifth ballot of the sequestered cardinals. He took the name Francis, the first pope with that name, although two of the best known saints in the Catholic Church are Francis of Assisi and Francis Xavier.

The election of Cardinal Bergoglio came as a surprise to me, and evidently to a lot of other people. For example, he was not even mentioned in the March 12 Washington Post article about who might be elected.

Not only is Pope Francis the first pope with that name and the first pope from South America, he is also the first Jesuit to be elected pope. Born in Buenos Aires in 1936, the son of an Italian immigrant, he entered the Society of Jesus in 1958.

While seen as a staunch conservative on such issues as abortion, contraception, and gay marriage, the new pope is said to be moderate to liberal on social issues such as poverty and social justice. Regardless of his own position, though, it is quite evident that the new pope faces huge problems within the Vatican as he assumes his new role.

Bob Englehart has been an editorial cartoonist for the Hartford Courant since 1980. On March 3, a cartoon by Englehart (b. 1945) appeared in that newspaper. Here it is: 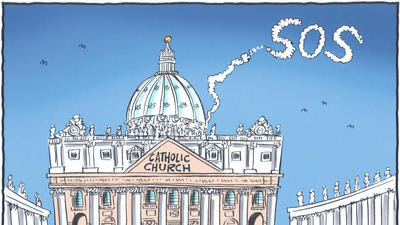 The problems of the Vatican are disturbingly portrayed in Andrew M. Greeley’s book White Smoke: A Novel about the Next Papal Conclave (1996). Although the next conclave after its publication was in 2005, it seems quite relevant to the current situation. One hopes, however, that the present situation is not quite as bad as that portrayed in Greeley’s novel, which I just finished reading earlier this week.

Greeley (b. 1928 ) is a Catholic priest and a sociologist who for years has taught at both the University of Chicago and the University of Arizona. He has written a huge number of books, both non-fiction (academic) works and novels—including several bestsellers.

In White Smoke, Greeley says that the fictitious cardinal from Chicago “understood clearly that the Holy Spirit does not whisper names in their [the cardinals’] ears but rather works through the ordinary political process of an election” (pp. 26-27).

In Greeley’s novel, Don Luis, who is eventually elected pope—and takes the
name John XXIV—gives a talk before the conclave begins. He closes talk with a quite significant statement, saying that what he considers to be of prime importance “is the affirmation that we exist to preach a God of love, we try to be people of love, and we want our Church to be, insofar as we poor humans can make it, a Church of radiant love.
“Does such a Church have a future?
“How could it not?” (p. 143).

Then later at a dinner party, but still before the start of the conclave, Don Luis prays, “May the Spirit inspire us to work well and with openness and courage . . . and grant that our Church, our poor battered Church, may shine once again as a light of radiant love to all the nations” (p. 204).

I pray that the words of Greeley’s fictitious pope will also be on the lips and in the heart of Pope Francis.
Posted by LKSeat at 5:27 AM