Every Sunday evening this month, like many of you June and I have watched “The Bible,” the 10-hour mini-series on the History channel. As one who has been reading the Bible regularly for more than 65 years, it has been interesting to see how the story of the Bible is depicted in this new production by Mark Burnett and Roma Downey, a husband and wife team. 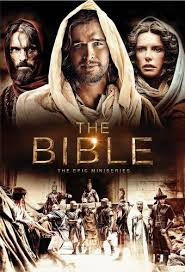 Some of you know Ms. Downey (b. 1960), who is said to be a devout Catholic, as Monica, the kind-hearted angel on the successful American TV series “Touched by an Angel.” In “The Bible” she plays the role of Mary, the mother of Jesus, during the time of Jesus’ public ministry.
The first episode of the mini-series was telecast on March 3 and was seen by 13.1 million viewers, the largest cable television audience of 2013 to date. The second installment continued "to deliver blockbuster ratings" for the network, attracting 10.8 million viewers.
In spite of its large viewing audience, there has been criticism of “The Bible” both from religious conservatives and liberals. The greatest support for the mini-series has clearly come from the right.
Still, some “Bible-believing Baptists” I was with recently complained about factual errors being portrayed in the new movie. And they were right: there have been some things that were clearly biblically inaccurate, which is not good for a program on the History channel. (Several errors are given here.)
There are other parts, especially at the beginning of the first segment, that are true to the biblical narrative but also questionable as history from a broader (scientific) viewpoint. As one who is not a fundamentalist, one of my main criticisms of “The Bible” is its presentation of all the Bible stories as literally true.
Most moderate and progressive Christians understand some parts of the Bible to have symbolic or metaphorical meaning rather than being literally true. But that way of interpreting the Bible doesn’t lend itself to graphic action scenes, such as are prevalent in “The Bible.”
Part of my criticism of what I have seen so far, which is 4/5 of the whole series, is regarding the amount of violence portrayed. Certainly any close reading of the Bible reveals a lot of violence over the three and a half millennium covered by the Bible. But the amount of violence in “The Bible” is a vastly larger percentage than that which actually occurred during those 3,500 years.
To be honest, if I were not a Christian and if I had not read the Bible throughout out my lifetime, I think that perhaps I would be more repelled by the first three segments of “The Bible” than attracted to the Bible by it. I wonder what those who are not Christian believers think.
The fourth segment, which aired on Palm Sunday night, was quite well done, though, and presented what seemed to me to be a very appealing Jesus.
Of crucial importance is how the series ends tomorrow, on Easter night. That last segment will deal with the crucifixion, resurrection and ascension of Jesus Christ. For me, and doubtlessly for a lot of Christians, the final evaluation of “The Bible” will depend greatly on how those pivotal events are portrayed.
In spite of some misgivings about the mini-series on the Bible, I encourage you, if possible, to watch the conclusion on Sunday evening. And whether you watch it or not, let me take this means to wish you a Happy Easter!
Posted by LKSeat at 5:54 AM