Had she not passed away in 2008, last Wednesday (2/13) would have been my mother’s 99th birthday. But as sad as it was, it was a blessing she passed away when she did. Although she was never officially diagnosed as having Alzheimer’s disease (AD), it was sadly clear that she was experiencing progressive dementia, which was most probably AD.
When June and I returned to the States in August of 2004, there were some signs that Mom was having some cognitive difficulties, but nothing that seemed very serious. Over the next three and a half years, though, we saw a fairly steady decline. When I saw the poignant online article about Alzheimer’s being the disease that leads to a “long, sad goodbye,” I knew firsthand what it was talking about.
I have recently learned about David Hilfiker, a social activist, author, and retired medical doctor. He lives in Washington, D.C., and Keith (my older son) knows him personally. Dr. Hilfiker (b. 1945) went through Yale University on scholarships before going to medical school and becoming a doctor. But now, sadly, he has AD.
Recently on his website, Dr. Hilfiker posted “Watching the Lights Go Out: An Autobiography.” That touching article begins abruptly with these stark words: “I have Alzheimer’s disease.” Very candidly he then shares the first indications (in September 2012) that he has “progressive cognitive impairment,” which he thinks is almost certainly the early stages of Alzheimer’s.
“As a retired physician who has seen his share of mentally declining patients,” Dr. Hilfiker writes, “I know what’s most likely in store as the disease gets worse: A long, progressive mental decline (to the point, for instance, where I don’t recognize my family), nursing home care, and early death from complications of the disease.”
But he is trying to make the most of the time that remains for him to write, sharing what it is like to fight the dreaded disease known as Alzheimer’s. It will be interesting to see how long he will be able to write about his experiences, and what he has say about them. Perhaps the greatest help will come from his honest sharing, squarely facing the problems caused by AD and dealing actively with the issues it raises, rather than trying to deny its existence. That’s something that all AD patients and the families need to do.
Perhaps falling victim to Alzheimer’s disease is one of the most prevalent fears of the future for all of us who are over the age of 65. Statistically speaking, it will hit many of us—and the longer we live the greater the chance is that we will suffer from AD before our demise. 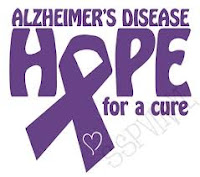 The hope, of course, is that soon there will be an effective treatment for those with Alzheimer’s, one which will greatly slow the process if not curtail it altogether. The federal government has made prevention of AD a goal to reach by the year 2025. But for some of us, that will not be soon enough.


So each of us older people live in hope that we will not become a victim of AD in the first place or that if we do, there will be some effective medication we can take so our loved ones will not be forced, as so many people have been up until the present, to say a long, sad goodbye.
Posted by LKSeat at 5:55 AM